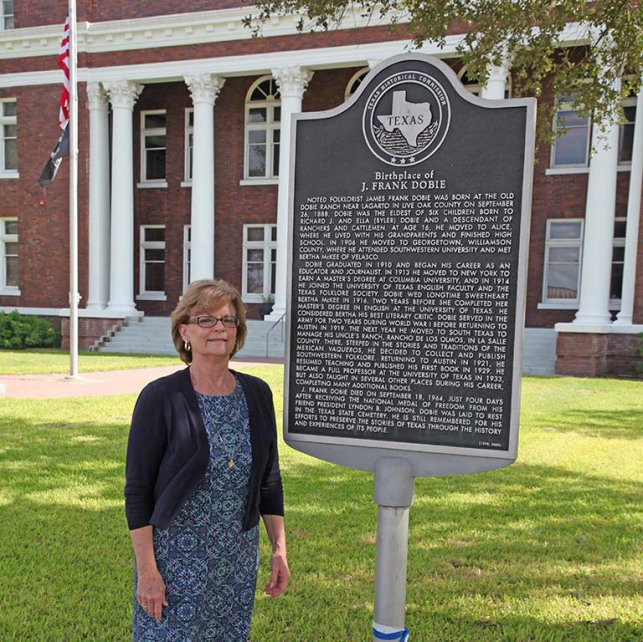 Mary Margaret Dougherty Campbell stands in front of the Texas Historical Marker for J. Frank Dobie, famous Live-Oak County folklorist, historian and author. Among other things, Dobie is famous for his part in preserving the Longhorn cattle breed, almost extinct when he began writing their stories. MM has long been a Dobie afecionada. She continues to preserve the mystique of the land and extol the stories of Live Oak County legends, history, and Texas ranching legacy. Photo by Richard Hudson.

Mary Margaret holds a B.A. in Interdisciplinary English and an M.A. in Rhetoric and Composition from Texas Tech University and an M.S. in Educational Administration from Texas A&M, Corpus Christi.  She taught English and speech for twenty years.  From 2006-2014, Mary Margaret was an oil and gas landman, researching land titles across South Texas. In 2004 she became involved with George West Storyfest as a stage manager and in 2008 became Assistant Director.  From 2009-2018, Mary Margaret was the Executive Director of George West Storyfest and George West Storyfest Association, Inc. In 2009 she completed the Texas Event Leadership Program curriculum. Currently, she works part time as a copy editor for the KAD Group.

Mary Margaret has presented papers and participated on panels at various conferences and meetings throughout her careers, including the Texas Folklore Society, Texas and Southwestern Popular Culture Association, the Texas State Historical Association, Tejas Storytelling Association, Texas Festivals and Events Association, and the Texas Commission on the Arts.  Her poems, essays, and articles have appeared in publications such as English in Texas, American Cowboy, Texas Poetry Calendar, Red River Review, Beeville Picayune, and The Progress. She has essays in six Publications of the Texas Folklore Society (TFS).

Mary Margaret currently serves as vice-chair of the Live Oak County Historical Commission and the chair of Dobie Dichos, Inc. She has served on the boards of directors of the following organizations: Texas Folklore Society; Texas Festivals and Events Association; Tejas Storytelling Association; Pan American Round Tables of Texas, Beeville Table.