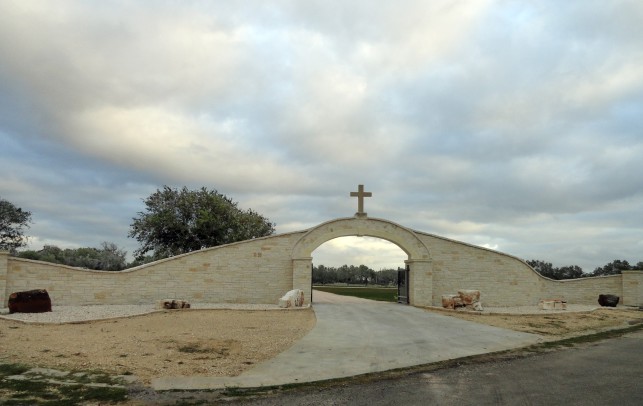 George Washington West built a namesake town in Live Oak County; he also worked to make it a town people would enjoy making their home. West's gifts to the people who chose to live in that town made it one of the most up-to-date towns in South Texas in the early 1900's. Among his well known gifts to the town is another, less known, the George West Cemetery. On March 4, 1916, West platted, subdivided and donated about six acres for a cemetery to the County of Live Oak. The first burial followed that year.

George West passed away on February 16, 1926 in San Antonio, Texas. On August 12 that same year, Charles Schreiner, Jr., Seth A. Searcy, Charles E. Burns, and the San Antonio Loan and Trust Company conveyed West's original gift of a cemetery to the citizens of Live Oak County. It was to be a free burial ground for anyone living in the county. Live Oak County Commissioner's Court was entrusted with responsibility for appointing persons to convey lots for purpose of burial free of charge. There was no segregation. Today a couple may set aside an area of a few plots for themselves and a few of their offspring.

Several gifts of property have been added to West's original. On August 1, 1944, Sol West, Jr. (George West's brother) along with Willard H. Perkins and Mabel West Perkins, conveyed an additional 6.33 acres to Live Oak County for the same purpose.

On August 31, 1945, William Hale Canfield conveyed two tracts of land for cemetery purposes to Live Oak County adjacent to the original cemetery. The first tract was 5.72 acres and the second tract was 0.72 acres. Hale Canfield owned a grocery store in George West and was the son of Chauncey and Minnie Elizabeth Canfield. His wife was Mabel Frances Lamm Canfield. They are both buried in the George West Cemetery.

A new survery of the George West Cemetery was completed on June 25, 2018 by Glen B. Mills, County Surveyor. The 1918 cemetery consists of 20.55 acres, more or less. A more comprehensive history is located at George West Historic Texas Cemetery under the Texas Historic Marker chapter of this website. This marker approved by the THC Staff and Board of Directors still awaits production.