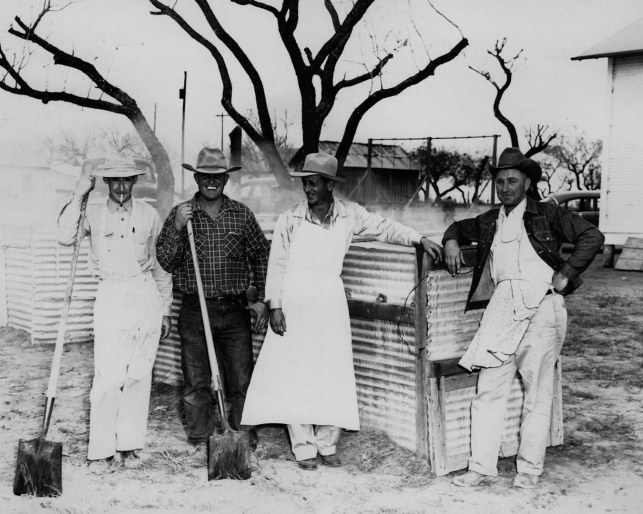 Ray Point is long known for mouth watering, smoked barbecue. Coke Braune, Hilbert Kopplin, Henry Magel, and Edmund Braune work evening and day to delight the neighborhood and families of Mildred Blashke and Dudley Bellows at their wedding in the 1950's. Thanks, Mildred Bellows for this photo.

Adpated from the The History of the People of Live Oak County in 1981:

It is thought the village got its name from the Ray Ranch and the roads coming to a point (intersection) by the school. Ray Point grew out of the vast Ray Ranch [owned by James F. Ray] in the early 1920's when the ranch was placed on sale. Many farm families bought various amounts of the slightly rolling acres of thick brush on both sides of the Sulphur Creek in northeast Live Oak County. Dilworth Realty and others were bringing buyers from Gonzales, Bexar and other counties.

[Live Oak County was originally part of the San Patricio Colony settled with Irish families by Empresarios John McMullen and James McGlion in the 19th century.

However, in the early 1900's Charles Tips, a community builder, began Hamiltonburg in 1913 (changed name to Three Rivers later), and George West began his namesake town in 1914. These towns drew people of many nationalities. Charles Tips' family and many others had settled in Guadalupe County after Germany's 1848 Revolution. By the early 1920's during the cotton boom, Tips encouraged some of those farmers to purchase land in the Ray Point area because of the rich land. Education was very important to them as the roads which led to the school's location make evident.]

[Many of these families still spoke German instead of English. The families worked together and often hired transient workers from South Texas and Mexico during the peak cotton seasons. Some of the transient families found Ray Point's community and life agreeable and remained. Paulina Garcia said that the education she received in the Ray Point School where she and German speaking children learned English together was the best education she ever received.]

Many of these 1920s newcomers, like the Muenzlers, Leuschers, Wiedings, Friedles, Braunes, Hornungs, Sparkmans...and others, still have heirs or the original families living [in Ray Point or nearyby Three Rivers]. The younger folk commute to work in nearby towns or work in the uranium mines. Cotton was king of the crops until boll-weevils and low prices changed that to cattle and grain.

There was, for many years, a two-room school, a grocery store, a blacksmith shop and a large frame church in Ray Point. For sometime, in the height of cotton farming, the John Schulzes of Three Rivers had a gin across the road fromn the store.

When the school systems of the two towns of Live Oak County decided to consolidate with some of the country schools, Ray Point fell to the Three Rivers Independent School District. "But," the story goes, "Not independent enough to move our building." [During this school consolidation, the buildings (many built identical to each other by the prior county school system) from many of the other small communities were moved to the campuses of Three Rivers and George West. They were often used for cafeterias and other departmental purposes.]

The school building stayed and is now a popular community center for barbecues, wedding receptions, etc. for a wide area.

In June 1969, the first uranium mining started construction of the plant by State Hwy. 72, 5.4 miles east of Three Rivers. Other companies soon started and for the next twelve years income of the area was greatly changed. In 1982, a court battle is planned to keep the immense tailing pond of the first company from becoming a waste cump.

As in all sections of Live Oak County, the Ray Point community holds little resemblance of the 1920's when there was a Demonstration Farm to teach various farming methods; on bad roads; no modern conveniences like now: pavement, electricity, telephones, terraces and water pipes for many miles to modern homes.

There is still a store but folks go to church in Three Rivers. The mailing address is Rural Route One, Three Rivers, and many of the 200 customers are in what is termed Ray Point. Then though, that is hard to determine, for the report of things going on there often overlaps Fant and Oakville.

Live Oak County Judge Bill Kendall said the Ray heirs still own some of the ranch on the east county line -- typical -- for one seldom sees advertisements of land for sale around Ray Point.

"Now that we have water, paved roads, school bus service and electricity -- why move?" -- a common comment of the subject.