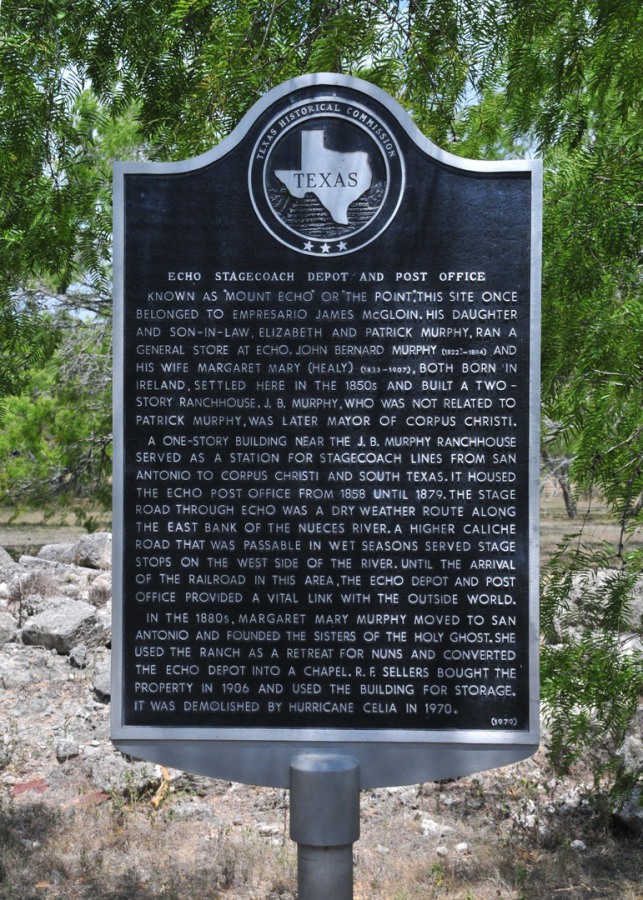 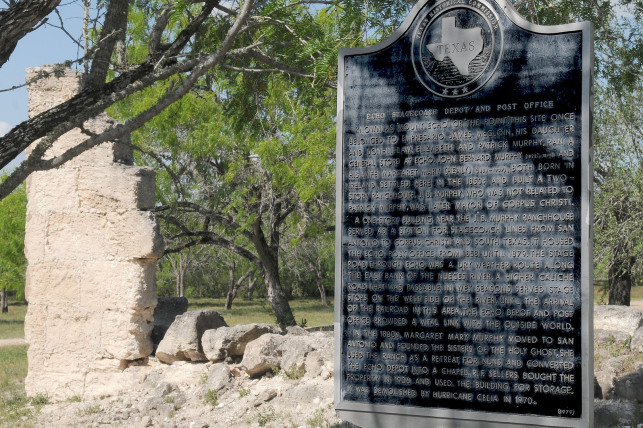 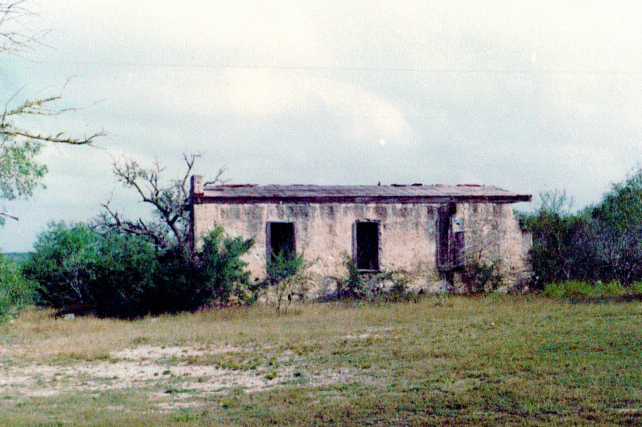 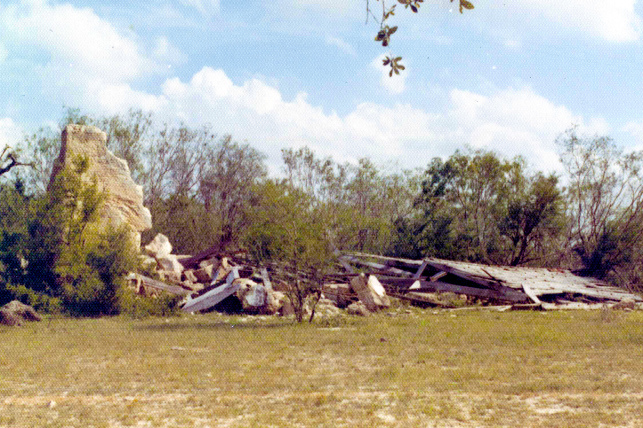 Known as "Mount Echo" or "The Point", this site once belonged to Empresario James McGloin. His daughter and son-in-law, Elizabeth and Patrick Murphy, ran a general store at Echo. John Bernard Murphy (1822-1884) and his wife Margaret Mary (Healy) (1833-1907), both born in Ireland, settled here in the 1850's and built a two story ranch house. J.B. Murphy, who was not related to Patrick Murphy, was later mayor of Corpus Christi.

A one-story building near the J.B. Murphy ranch house served as a station for stagecoach lines from San Antonio to Corpus Christi and South Texas. It housed the Echo Post Office from 1858 until 1879. The stage road through Echo was a dry weather route along the East Bank of the Nueces River. A higher caliche road that was passable in wet seasons served stage stops on the west side of the river. Until the arrival of the railroad in this area, the Echo Depot and Post Office provided a vital link with the outside world.

In the 1880's Margaret Mary Murphy moved to San Antonio and founded the Sisters of the Holy Ghost. She used the ranch as a retreat for nuns and converted the Echo Depot into a chapel. R.F. Sellers bought the property in 1906 and used the building for storage. It was demolished by Hurricane Celia in 1970. (1979) Marker is Property of the State of Texas.

The subject to be marked is Echo Stagecoach Depot'and Echo Post Office at Echo,Live Oak County, Texas. Echo was established as a post office on November 1, 1858,and disestablished on October 27, 1879. The Echo Stagecoach Depot was built in ____ and served as a depot and post office between San Antonio, Nuecestown, and Mexico from 1858 until 1879. This line was a segment of  the 'Old Spanish Trail'.

Echo Stagecoach Depot was a one-story building made of caliche blocks cut out of the nearby hills and set together with mortar. The building was about fifty yards from the back door of the white, two-story ranchhouse built by the J.B. Murphys in 1855.

'Mount Echo,' or 'The Point' as it was called, was located on a league of land within the Spanish Land Grant given to James McGloin and John McMullen, Irish impresarios[sic], in accordance with the Coahuila-Texas colonization law in 1825.

By 1834 San Patricio municipality was established twenty miles down the Nueces River and named by McGloin and McMullen for their patron saint and in deference to the Spanish speaking people who lived there.

Each impresario[sic]received two leagues of land. James McGloin bought the Patrick Nevin league in Live Oak County for the heirs after Mr. Nevin was killed with Colonel Fannin at Goliad in The Texas Revolution.

John McMullen sold one league to James McGloin and it was on this one-third league which James McGloin in turn willed to his daughter, Elizabeth, wife of Patrick T. Murphy, the thirty acres known as 'The Point' or Mount Echo, was located.

Mr. McGloin never lived on this land but made his home in San Patricio on Round Lake. Patrick Murphy and Elizabeth maintained a general store at Echo during their ownership of the land.

Ft. Merrill, established in 1850 and located a few miles up the Nueces River from Barlow's Ferry, was on this league which was called the McMullen league.    The Fort was named for Captain Hamilton Merrill of the Second United States Dragoons and was established to keep down the Indian raids.

This third league of land was given by   Elizabeth Murphy in her will to her two children, Lizzie Frances and Frances Joseph Murphy. On June 20, 1885, Lizzie Frances Murphy deeded her land to Margaret Mary Healy Murphy. Mrs. Murphy bought two tracts; the first contained 1,042 acres and the second was a thirty acre tract known as 'The   Point'or 'Echo'.

Mr. John Bernard Murphy and Margaret Mary Healy, both natives of Ireland, had met in Matamoras, Mexico, where they were married May 4, 1849. They were friends of the impresarios[sic] McGloin and McMullen who stayed at the Healy Hotel which was owned by Margaret Mary's aunts.

The Murphys became a part of the San Patricio and Corpus Christi social life, and they were active in charity work among the poor both in the towns and on the ranch.  In the years prior to the Civil War, bandits inflicted plunder and robberies on the Texas ranches. Cattle were stolen and homes were utterly destroyed. When war between the states seemed inevitable, the Murphys moved to Corpus Christi where Mr. Murphy practiced law and in time became the mayor of Corpus Christi. Later an illness forced his resignation. He died July 4, 1884.

Margaret Mary Murphy moved to San Antonio in 1887 where she dedicated her life and personal income to St. Peter Claver Academy, 203 Nolan Street, San Antonio, Texas, a free school for Negro children. She also founded a teaching order, The Sisters of the Holy Ghost, and opened Our Lady of Light Convent in 1892. She kept the ranch as a retreat for nuns in training, and it was during this period that she converted Echo Stagecoach Depot into St. Stephen's Chapel where Mass was said once a month. It was blessed by Right Reverend Peter Verdaquer, Vicar Apostolic of Brownsville on Wednesday, October 18, 1893.

In 1906 Margaret Mary Healy Murphy deeded her ranch property to Mr. R. F. Sellers and his wife, Nola A., of Gonzales County, Texas.

Mr. Sellers was a Baptist and, having no further use for the Chapel, used the building for storage.

Mrs. Nola Sellers died soon after they came to the ranch. The Sellers had three sons, S.F., Dick, and Robert. S.F., who had moved to Wyoming, died leaving a son, Hub Sellers, who lived in San Antonio. Mr. Sellers and his sons, Dick and Robert, lived in the ranchhouse at Echo. In 1924 the ranch was partitioned among Mr. R.F. Sellers, S.F.'s son Hub, Dick, and Robert; however, Dick married Lizzette O. in 1925. They all continued to live at the ranch. Mr. R.F. Sellers died in 19__, and Robert died in 19__.    After Robert's death, Dick and Lizzette Sellers remodeled the house changing the back of the house to the front so that Echo Stagecoach Depot was a few yards outside the front yard gate. Mr. Dick Sellers died in 1957.

In 1968 Mrs.Lizzette O. Sellers sold the acreage where the ranchhouse and Echo Stagecoach Depot were located. The depot was standing without doors or windows but was sturdy for a building of that age at that time. The acreage was sold to Mr. and Mrs. Dan Coker of Corpus Christi, Texas, who are in residence at the ranch at the present.

In 1970 Hurricane Celia took her toll of Echo Stagecoach Depot reducing the building to a pile of large blocks with the roof resting jauntily atop. Only one corner of the rock wall is standing.

The stageline came into being as a result of the increase in population in the colony. There was a stageline from San Antonio to Corpus Christi with stations at Mount Echo, Fox Nation, or Gussett­ ville, and the present Oakville.

In 1856 Live Oak County was organized and Mount Echo was located in the southeastern part of the county. The frontier town of Lagarto, reestablished in 1856, could be reached west across the Nueces by ferryboat from Mount Echo, a distance of approximately three miles. This river crossing was known as Belden Ferry, and in 1865 it was known as Miller's Ferry. Stage stations on the west bank of the Nueces River were: Ramirena Stage Stand, Lagarto, Penitas, or Casa Blanca, which was a post office from November 20, 1875 to January 19, 1880.

There were two roads for traveling from Oakville to Browns­ville, or Laredo--a dry road on the east bank of the Nueces River which passed through Echo, and a wet road which ran on the west bank on a higher, caliche road from Oakville through Barlow's Ferry (now Dinero) going west to Lagarto. The post office at Mount Echo came into being during the ownership of Mr. and Mrs. John Bernard Murphy. The depot and post office at Mount Echo rendered a service to the people of the frontier during a turbulent era of Texas history. This era began in 1858 during those years of the war between the states which ended in 1865 and terminated in 1879. This was just before the San Antonio Aransas Pass Railroad was completed in 1888 through the Henry Bend ranch. The depot for the railroad was only five miles away at Mathis on the land that Mr. Thomas Henry Mathis gave as a townsite and which was dedicated in 1889.

It seems fitting that this subject should be commemorated because it rendered service which was a vital part of the romantic past of our southwest Texas heritage.

After the capture of Matamoras by General Taylor, many of the officers in his army whose term of service had expired did not reenlist. Instead, they entered business or followed their professional careers and became esteemed citizens of the town. One of the most distinguished friends was a young gentleman who immigrated from Ireland in 1845 and who later played an important and unlauded role among the reporters of General Taylor.

John Bernard Murphy, born in Mallow, County Cork Ireland, in 1832 or 1833, sailed from Liverpool on October 22, 1845, on the Ship Sir John Campbell bound for New Orleans. He arrived there, heard the cry for volunteers, and proudly answered the call to help the country that promised freedom for all.  On his retirement from the army he became editor and publisher of The Gazette in Monterrey, Mexico. J.B. Murphy sold his interest in The Gazette and moved to Fort Brown where he entered the commercial house of Strothers and Kathersh. Later he moved to Matamoras, Mexico, where he met and married Miss Margaret Mary Healy then sixteen years of age with whom he became acquainted at the Healy Hotel which was managed by her aunts. Margaret Mary and her aunts immigrated from Ireland in 1845.

Mr. Murphy joined the law firm of Edmund Davis of Texas who later became Governor of Texas. In 1850 he speculated on the land in the San Patricio Land Grant by purchasing land from James McGloin. He built a two-story ranchhouse on the land in 1855. The Murphys left the ranch in troubled days prior to the Civil War.

Mr. Murphy continued his law practice in Corpus Christi. He was elected to the First Constitutional Convention held in Austin in 1875 as delegate from the newly constituted county of Nueces. The Honorable Judge Murphy was elected Mayor of Corpus Christi in April, 1880. Overwork was taking its toll of Mr. Murphy, and Mrs. Murphy suggested a leave of absence. A vacation of one month was spent in Galveston in July 1882. On his return his health declined and in 1884 requested a leave of absence. He died July 4, 1884.

F.     Pictures of Echo Stagecoach Depot standing without windows in 1969.

* 2017 Marker Chair and Webmaster note: The THC notes a difficult time in acquiring more rigid data about the Echo Stagecoach property than was required for application in the beginning of the marker program just a few years before.

The beauty of research is constant renewal of valid information. Some above sources give dates stated in this narrative regarding ownership and the Murphy relationship.

After extensive research, present day owner, Andrea (Andi Estes) notes that contrary to above marker statement, the Murphy men were indeed brothers, both having served in the Texas Legislature. JB became the Mayor of Corpus Christi. Andi also found original deeds and contracts in courthouse documents which contradict J.B. Murphy as the builder of the house while his brother, Patrick, and wife, Elizabeth, lived there. It now appears that the property was never owned by JB, but first by Elizabeth and Patrick and later Margaret Mary Healey Murphy after the death of JB. 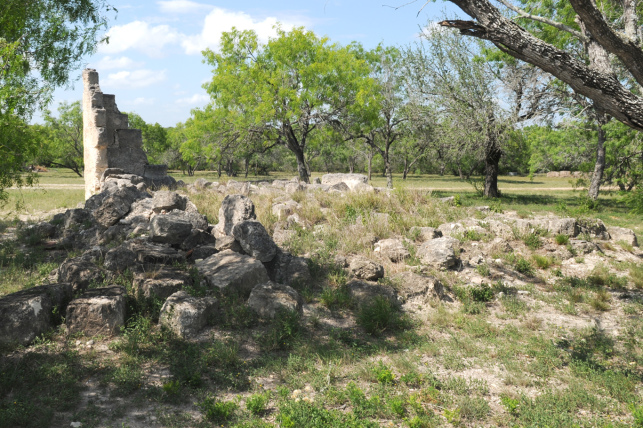