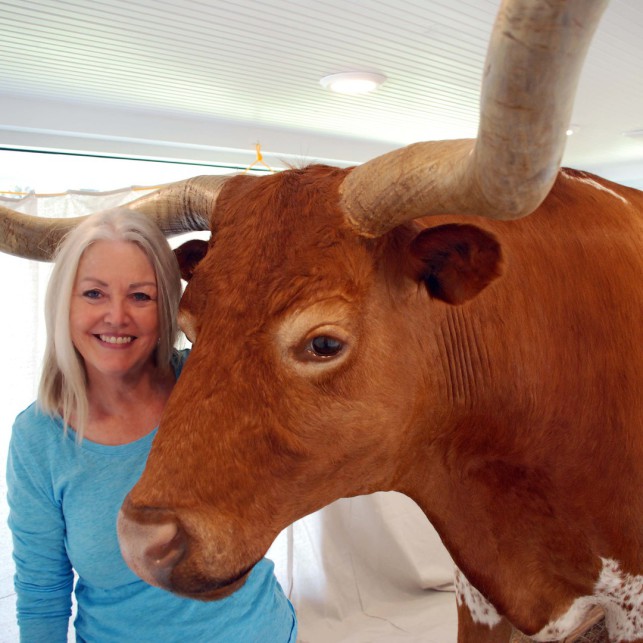 Leslie Walker, LOCHC Chairperson at the time, with Geronimo's second likeness. They are inside the newly reconstructed historic Geronimo home on the Live Oak County Courtlhouse Lawn in George West, Texas. Shortly afterward, Geronimo and his new home were unveiled for a large audience from the Live Oak County and surrounding area. Both the first and this second Geronimo reproductions were masterfully accomplished by Hibler Family Taxidermy from Kingsville, Texas. Geronimo's likeness was donated through Felix Serna, Longhorn Foreman for El Coyote Ranch in Brooks County and La Paloma Ranch in Kennedy County. Photo by Richard Hudson. 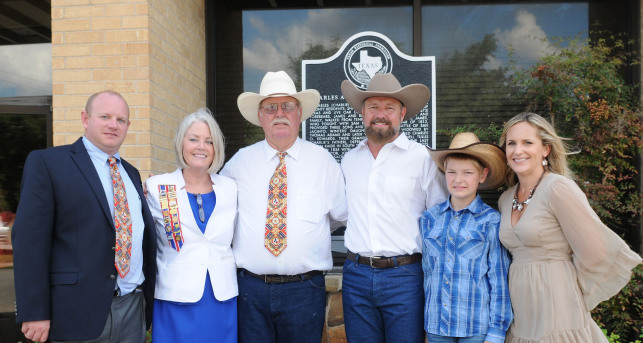 Leslie, second from left stands with her family before the Charles and Emma Tullis Texas Historical Marker just after the unveiling of the marker honoring their grandparents. Leslie, her son and brother wear Daughters of the Texas Republic ties, and Leslie has her honor badges. The marker stands in front of the SouthTrust Bank in George West Texas. Photo by Richard Hudson.

A Live Oak County native: my family came here in 1848.  I graduated from Texas A&M in Horticulture and served on numerous non-profit boards, including the George West Chamber of Commerce, the Boys and Girls Club, and am an active member of St George Catholic Church.

Some years ago, while sorting through old document sent to my paternal grandfather, I found a letter written in 1934 honoring the 100th year centennial of Texas' independence. The letter described my ancestors' journey when they migrated from Tennessee to Texas in 1832, just as the fight for Texas' Independence was heating up.

Later at the battle for San Jacinto in April of 1834, shortly after the Alamo massacre, four of my ancestors, James Washington Winters family, fought on the battlefield. The story of their lives and migration to Texas captivated me.

I became curious to discover more about my Texas roots, which lead me to apply to become a member of the Daughters of the Republic of Texas (Alamo Mission Chapter) in San Antonio.  I so enjoyed the company of women with a common interest in Texas history that I found myself spouting about its importance in our County Courthouse.

One day while attending Commissioners Court, I was seated next to this lovely, lady who was there with her husband because they wrote a history book about Live Oak County. Janis Hudson and I became fast friends from that day forward. With her husband, Richard Hudson, who acted as our Marker Chair, we became professional and personal friends in history.

As things progressed and the effort to get the Commission up and running again after a period of inactivity, I was able to take the position of Chairperson when Ms. Denniston became pregnant and unable to continue her chairmanship.

We journeyed together to pursue a goal of recognizing and preserving our history.  I was Chairperson for three years and am proud of our many accomplishments.  Judge Huff, former Commissioner Willie James, and I cobbled together our Administrative Rules.

The Hudson’s identified many potential historical markers; after all, they finished their book about Live Oak County History.  During my tenure, I felt honored to spearhead the Geronimo project alongside the Commission. I helped to raise over $100,000 to construct a new historically accurate building with state of the art climate control for the new Geronimo currently being secured from a live longhorn with similar color, markings, and size of the original Geronimo from 1916.

I am especially proud of our work to have the Ray Point Bridge moved to Kopplin park in Three Rivers.  Working with TX Dot and the Texas Historical Commission was challenging as well as rewarding.

The Oakville Jail Marker helped me to learn so much more about our County seat until 1854 and the Loma Sandia Marker was the most interesting history that opened my eyes to our rich heritage going back 3000 years.

I would be remiss without a word for the Murphy Home Marker that recognized the life of Mother Margaret Mary Healy Murphy who immigrated from Ireland to eventually become a Nun and open a school for black children after the Civil War.  She is so loved by the order of Nuns that today, because of the research done by Andrea Estes, she is being vetted for Sainthood.

We, as a commission, did many meaningful things that there are too many to describe.  It has been a joy and remains an honor to be a part of the LOCHC today.