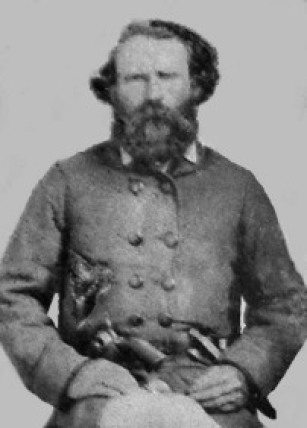 Alexander Coker, a prominent citizen of Oakville, Texas in Live Oak County served in various county capacities for many years, most notably Sheriff during the last years of the Civil War and later was re-elected 8 times due to his popularity and standing in the small community.  He was born on 3 April, 1827 in Darlington, S.C., the eldest of 4 children of Sampson & Priscilla Champion, died in Oakville on 19 September 1898, and is buried in the Oakville Cemetery beside his wife Sara Clarkson (1828-1909) whom he married in 1845 in Arkansas.  In 1847 they were living in Union Parish, LA and by 1849 they had moved to Franklin, Arkansas where they lived with his parents.  They had 9 children, and since both his parents died in San Antonio, the elder Cokers must have accompanied him to Texas.

Coker first came to Boerne, Texas in 1858, and his last child, son Theodore Rainey Coker was born there on 22 November, 1858, thereafter moving to Live Oak County in 1860.  In 1862 he enlisted in 2nd (Wilkes) Regiment, 2nd (Carter's Brigade) Regiment  of the 24th Texas Cavalry (2nd Mounted Rifles) for the duration of the war but became disabled, either wounded or sick at the Battle of Arkansas Post, until he was discharged in 1864 at Galveston with the reason being given as "elected sheriff of Live Oak County".  Reported sick in June of 1863, he was furloughed from the hospital in Petersburg, VA in August of 1863. From July 1866 until May, 1870 he served as District Clerk.  The U. S. Census of 1870 reveals that his mother-in-law, Sara Clarkson still lived with him (Father-in-law also in 1860 Census) and his son James (age 22) and wife who were the heads of the household. Oakville, in mid-Live Oak County was on the stage road from San Antonio to Corpus and was the county seat of Live Oak County from its organization in 1856 until 1919 when its citizens were outvoted and the county seat moved to George West.  As of 2015 there have only been 22 men who have served as sheriff during the history of the county which is less than most. (Tise 1989:342-343).

A rare ambrotype (shown above) in the possession of this author shows Coker in his Civil War uniform with a Colt Dragoon pistol, and a large Bowie type knife, ready for war, circa 1861.  Many Live Oak County men enlisted in the Confederate cause in Oakville, including Coker, Calvin Jones and Samuel Foster, the latter whom left his memoirs entitled Douglas's Texas Battery, CSA (1864).  Also in the collection of this author is an old faded photograph of Coker's grand 2-story home in Oakville, and another photograph of Coker and Live Oak County officials circa 1890, near the county courthouse which is no longer standing.  Alexander Coker and his family are stalwart examples of the character needed to settle the Texas frontier and make lasting contributions to American society.  He was a rancher and farmer, evidenced by the appearance of an article in the 1870 Galveston newspaper of how he prevented weevils in his corn by first boiling the corn then replacing it in the crib (Galveston Daily News, 1870).

According to his Civil War records he went AWOL to become elected Sheriff of Live Oak County in 1864.  Also known in this collection is an affidavit signed in 1884 with Coker serving as County Tax Collector from April 1876 until January of 1889(see framed document).  He also served as County Treasurer from January 1891 until his death in September of 1898 (History of the People of Live Oak County (1982: and Ancestry.com).  On August 15, 1899, his wife Sara applied for a Confederate pension and this 4 page document reveals much about her dire conditions (Alabama, Texas and Virginia, Confederate Pensions, 1884-1958).

Since Alexander first came to Boerne, he may be related to the Coker family of the small Coker community north of the original town site of San Antonio, and the Coker family cemetery and church can still be located off Hwy. 281 just north of Loop 410 off West Avenue.  The Coker family lived in Oakville many years, because resident Alec Coker made news in 1915 when he killed a record non-typical whitetail buck with his .45 pistol (Boone & Crockett Handbook, 1964:117, Big Rack (1980:125).  However, either the date of the kill is wrong or it was a descendant of Alexander Coker, Live Oak Sheriff that killed the deer because as we have seen, Alexander Coker died in 1898.  Glen Coker, is mentioned in the book, The History of the People of Live Oak County, Texas (1982:180,189), and apparently some of his heirs married into the Coquat family of Live Oak County, e.g. Homer Dove was a grandson of Alexander Coker.  The Dove family had come from Fairfield County, S. C. and the Coker family had come from Darlington County which is across Kershaw County, so it is possible that these families were acquainted prior to their arrival in Texas.