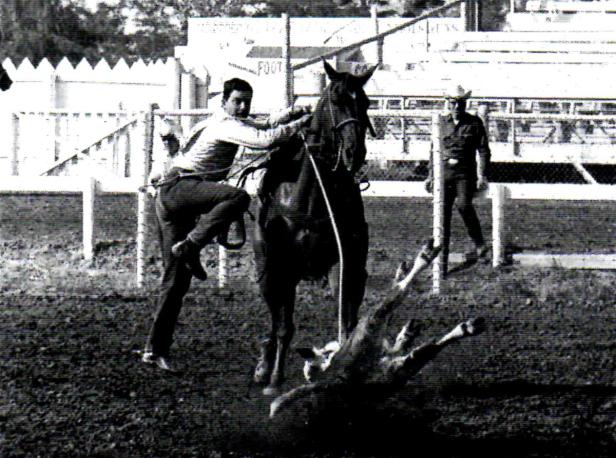 From his youth and well into his adult years, Jim Dougherty competed in many rodeos. In this photo, he is seen roping a calf at an event in Cheyenne in 1972.

GEORGE WEST - It is no secret tht throughout time, Live Oak County has been home to many great men. A few ofthem are of legendary renown.

One of those men, who is proudly remembered by the ranching and rodeo communities is James Frances "Jim" Dougherty. While he passed away in 2006 at age 67, his story continues to live on.

Dougherty's daughter, Mary Margaret Campbell of George West said of her father, "My dad was a competitor. He was a perfectionist. He took very seriously anything he set out to do."

Campbell in April traveled to Fort Worth to accept a plaque and to give an acceptance speech in honor of Dougherty being named to the 2018 class of the Texas Rodeo Cowboy Hall of Fame. Fellow George West cowboy Phil Lyne received a similar honor in 2006.

"They're heroes - Phil Lyne, Jim, all those cowboys who came before him opened the door for the ones who come up today," Fluitt said.

Perhaps it was Dougherty's adaptability as a rodeo cowboy that sticks out most in Fluitt's mind.

"He was in Pecos, Texas, in 1964, which is one of the most prestigious rodeos in Texas," Fluitt said. "...(Dougherty) won in 1964 in calf roping and back then, they stepped off their horses on the left side. Then 10 years later, they were stepping off on the right side. So as an athlete, as the sport changed, he changed with it and that was pretty impressive."

Born in 1939, and raised in the South Texas Brush Country, Dougherty was drawn to roping at an early age. Campbell said that when her father turned 13, a family friend coached him in the arena and helped Dougherty to convert his ranch roping skills for use in the arena.

By 1956, Dougherty's passion and practice paid off, resulting in him being that year's National High School Roping chanpion. Campbell said in his college years, her father was on the rodeo teams at Sul Ross University and then-Texas A&I University (now Texas A&M University-Kingsville.

"After graduation, he got his RCA (Rodeo Cowboys of America) card and mainly roped calves but was also a header during the old knot-tying days, then converted to facing in the 1970s, while continuing to rope calves," Campbell said during her acceprtance speech in April. "By this time, Dad decided to rodeo closer to home. He and his teenage son, Buster, took the South Texas team roping rodeo world by storm with feats like winning the Rocksprings rodeo one night and Leakey the next. When tripping steers took his interest, Dad bought back his card and turned to that event pretty much full time in the early 1980s."

It was tripping, however, that would lead to a life-altering event for Dougherty. In 1984, at the San Angelo Roping Fiesta, Dougherty fell and suffered a traumatic head injury. His horse also fell. As a result, Dougherty spent the remainder of his life incapacitated and in a wheelchair.

"It has been said that 'He had ice water in his veins' when it came to match ropings," Campbell said. "He was hard to beat. In match calf ropings, he beat the likes of Ernie Taylor and others. In team match ropings, he partnered with a variety of heelers. He and Garland Hoff won saddles in 1974 at a match roping in Cotulla, they also won a match in Hondo the same year."

Aside from his prominence as a competitor in rodeo, Campbell also recalls her father's involvement as a member of the Texas Youth Rodeo Association board of directors, on which he also served as president.

"He liked to joke and have fun, but business was business, and roping and rodeoing were 'business' to him," Campbell said. "There was no joking around in the practice pen - a.k.a. arena - or in the rodeo arena. Dad expected concentration on the task at hand, from himself and from the others in the arena - or pasture or auction board, etc. - with him. What he expected from others, he expected more from himself. He had a great work ethic, which I know he passed down to me.

"He was personable and had a lot of friends in every realm of his life and was highly respected as a roper, a cowboy, a cowman, and a person."