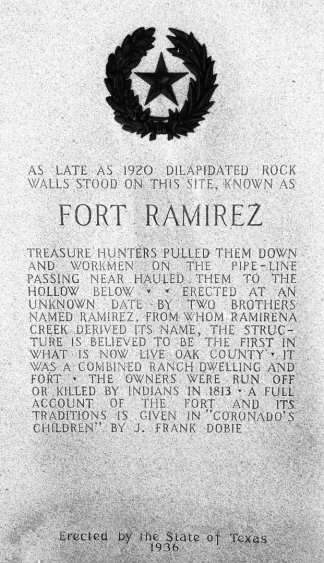 Fort Ramirez marker is considerably "off the road". Here the Live Oak County Historical Commission enjoys an outing hosted by Jim Warren, the county's local archeologist, to the marker and the nearby original ranch ruins of J. Frank Dobie's home. LOCHC appointees and friends were joined here by the George West Seventh Grade History students and teachers. Photo by John Walker.

As late as 1920 dilapidated rock walls stood on the site, known as

Treasure hunters pulled them down and workmen on the pipe-line passing near hauled them to the hollow belos *  * Erected at an unknown date by two brothers named Ramirez, from whom Ramirena Creek derived its name, the structure is believed to be the firsrt in what is now Live Oak County  *  It was a combined Ranch Dwelling and fort  *  The owners were run off or killed by Indians in 1813  *  A full account of the fort and its traditions is given in "Coronado's Children" by J. Frank Dobie. (1936) Marker is Property of the State of Texas.

The Fort Ramirez Marker is a gray granite marker established very near the original Ramirez ranch location in celebration of the Texas Independence Centennial in 1936. The Texas Historical Commission had yet to be organized. A special Texas Centennial Committee oversaw a prodigious Texas sized memorial project placing markers and other permanent memorials across the state.

Fort Ramirez is somewhat a misnomer because it was not an actual fort manned by a military force. It was a family dwelling built of stone in the Spanish haciendo style and fortified for safety of the family and those who served them.

J Frank Dobie, Live Oak County's illustrious writer and folklorist, grew up on his family's ranch where the Ramirez fortification existed, though built sometime during the Spanish Colonization period of Texas History. By 1930, practically nothing was left of the Ramirez dwelling. Everything had been taken away by fortune hunters and collectors. Dobie tells the story in Coronado's Children: Tales of Lost Mines andd Buried Treasures of the Southwest published first by Southwest Press, 1930 and now by University of Texas Press 1994. 84-93. A breif rendition follows:

"The land records in the county seat [Live Oak County] recite a history that gives to the Ramirez legend a fitting background. Undoubtedly the ancient landmark was the first of any permanence to be erected within the confines of what is now Live Oak County, though when it was built no record tells. Undoubtedly it served for fortification as well as for residence. In 1829 the heirs of Don Jose Antonio Ramirez and Don Jose Victoriano Ramirez entered, from the state of Tamaulipas, a plea to the Mexican government for title to eight leagues of grazing land 'known as the Rancho de los Jaboncillos but more commonly as Ojo de Agua Ramirena.' On this sitios, according to the plea, the Ramirez brothers had cleared the land for fields, built a tanyard, erected corrals and ranch houses, made other improvements, and were living in peaceable possession of the estate, though for some reason they had not yet received a grant to it, when in 1813, as a result of the Mexican uprising against Spain, all frontier troops (presidiales) were withdrawn. This withdrawal released hordes of Indians to prey on the few scattered rancheros. The Ramirez peole were forced to leave their ranch in such haste "que nada se saco de la casa, ni de los muchos bienes de campo que habia" ('that nothing was taken from the house nor of the extensive herds on the range').