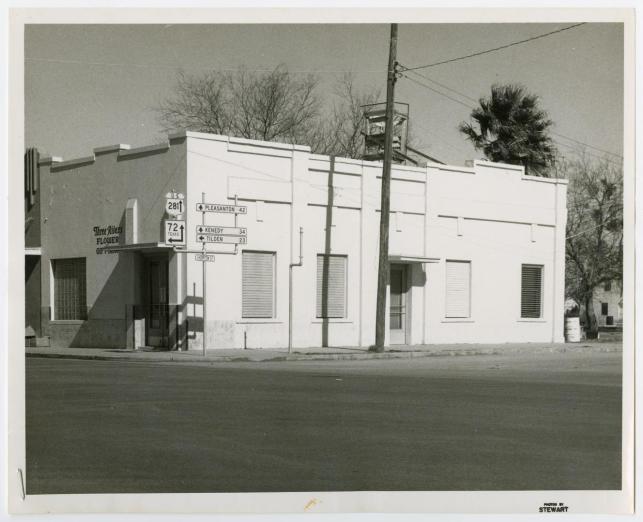 This RTHL marker was applied for on November 1, 1963, the year of the Three Rivers Golden Centennial. All information verified by C.R. Tips [Founder of Three Rivers and the bank]. Marker was received in 1964.

First State Bank Building and office of C.R. Tips, founder of the City of Three Rivers, Texas, in 1914. (1964) Marker is Property of the State of Texas.

As one can see, the requirements for application and cost for the process has continued to change since the time Texas began documenting historical sites and events.]

In the early part of 1914, the First State Bank in Live Oak County was organized. It

by charter amendment, to the First State Bank of Three Rivers, Texas. The bank building

was built in the early part of 1914, in time to be used for the opening of the bank when it received its charter from the State of Texas. It was the first substantial brick building built in the new city of Three Rivers.

The organizer of the bank, and its first president, was Charles R. Tips, who was 21 years old at the time. One of the other initial stock holders when the bank was organized was Congressman John Nance Garner who represented the 15th Congressional District of which Live Oak County was a part. Mr. Garner was subsequently Speaker of the House and Vice President of the United States.

The city of Three Rivers was founded in 1913 by Charles R. Tips, at the time the San Antonio, Uvalde and Gulf Railroad (Now part of the Missouri - Pacific system) was built from San Antonio to Corpus Christi. The town was originally called Hamiltonburg because it was built on the Hamilton Ranch.

After a few months, the name was changed to Three Rivers, Texas, on the recommendation of Mr. Tips, because it was at the confluence of the Nueces, Frio and Atascosa Rivers.

Mr. Tips sold his interest in the bank and moved away from Three Rivers in 1917 he entered the United States Army to serve in World War I.

Mr. Mack T. Buckaloo, the present President of the First State Bank of Three Rivers which still owns the building, has offered to give the building to Live Oak County to be used as a historical museum.