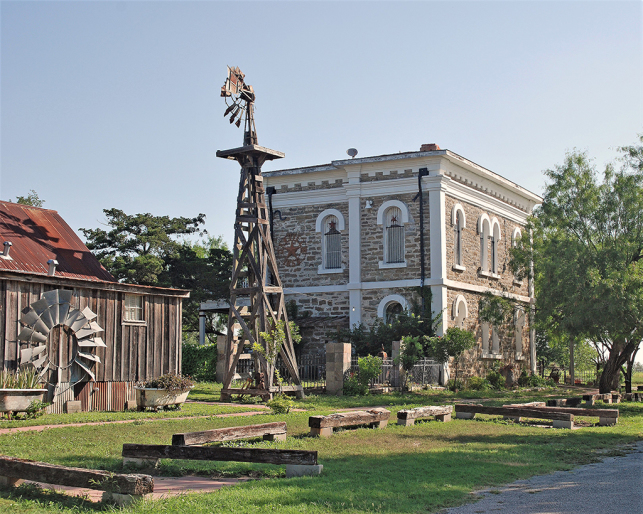 One summer in the early 1970s as he was tooling down US 281 to SH 9 for a weekend of relaxation on Padre Island, Albert Davila caught the glimpse of a curious sight. It was a two-story rock building jutting from a cacti and live oak littered hill. A few years later after he and Mari married, they decided to turn off the highway to get a better look.

The old rock building sat on the corner of what appeared to be an abandoned town square. It seemed empty, the yard grown up with weeds and cacti and a few sprawling oak trees. A few clothes hanging on a clothesline beside the structure was the only telling sign that it may be occupied. They made the circuit then drove back to the highway and on to a weekend of fun at the Padre beach.

“We did this every time we drove to Corpus,” said Albert. “Mari and I were simply fascinated with the old building, the sole remaining icon of Oakville, a once thriving community. We wanted to know more and every trip to Corpus we’d drive around the old building until one day we decided it would be a wonderful place to buy and fix up for a weekend retreat.”

Davila’s father, Albert Sr., came from Mexico to Texas with his seven brothers to join the Army when the United States entered World War II. On his way to Africa, Albert Sr. became a nationalized US citizen before his ship landed. Some of his other brothers also became nationalized citizens. All came home safely once the war ended. Only one brother was wounded, eventually recovering, and several returned to the mining business in Mexico.

“After the war,” Davila said, “my father became a cattle inspector for the US. Hoof-in-mouth disease was prevalent and because Dad could speak Spanish, the US sent him with a team of inspectors to Mexico to inspect cattle. He worked with farmers and ranchers to eliminate a lot of sick cattle.  Though he met my mother, Dora, at school in San Antonio in the early 1930s, they remained unmarried while he served in the armed forces then inspected Mexican cattle. It was a full time job, one he did four years after the war before he returned to Texas and married my mother. She was originally from New Braunfels.”

Albert Jr. graduated from Jefferson High School in the late 1960s and attended Community College of San Antonio. “I studied geology. It was my passion. I loved rocks,” he chuckled.

He checked out of Community College when presented an opportunity to work with his uncles in Mexico in the mining business. Albert Jr. worked there a couple of years then came back to San Antonio to work in his father’s plumbing business. Additionally, his dad had partnerships with an AC company and an electrical company. “So I worked for all three of them,” Albert Jr. said, “and took over my dad’s businesses in 1980.”

By 2002 Albert and Mari knew the old building was the Oakville jail. They had walked around on the property so often that they fell in love with it and now were looking for the owner because they wanted to buy the old jail.

“We didn’t know who owned the old rock jail,” Albert Jr. said, “so we went to Van’s Bar-B-Q. A little old lady wearing a red hat put us onto Buddy Jones. She said she thought he owned the building. Of course, we wanted to purchase the entire town square so Buddy gave us the phone number to the Rosebrock sisters. We did that and eventually had our attorney work everything out with Buddy’s and the sisters’ attorneys and ended up buying the town square and jail.”

The Davila’s were real excited about finally buying the jail and old town square. “We were just in love with the jail before we even walked in it. Guess it was the rock facade. I told you I studied geology because I loved rocks. And here was a two-story rock structure full of Texas history.”

“But once we walked inside it was a little scary because everything was falling apart. There were mice and snakes and owls and raccoons living in there. There were no windows, no doors, no nothing. It was open all the time after the Rosebrocks moved out some years ago. So anything that wanted to live in the old jail could fly, crawl, or walk in there,” Davila said laughing and shaking his head.

Albert and Mari couldn’t get a loan on the property to fix it up. No banker was willing to take a chance on it. So they started fixing it up with their own money. Little by little they got it to looking decent enough they convinced a lender to advance a loan “so we could finish remodeling and making the jail livable.”

Because the Davila’s love South Texas they thought originally of buying the jail and fixing it up as a weekend retreat just for themselves. Then an opportunity to buy the whole town square fell into their laps.

“At first, we didn’t purchase the jail and town square with the intention of turning it into a bed and breakfast. It was just going to be a second home for us, a weekend retreat. Then folks started dropping by to admire our work and next thing we know folks wanted to get married there under the hanging tree and spend a night in one of the bedroom suites in the jail. So we started renting it out.”

“We have some excellent, excellent neighbors here in Oakville. They’re all good people and they started offering us some of their original homes built by their grandfather’s and mother’s when they settled this area. So we started moving houses and placing them on the town square. Originally Oakville had houses, stores, blacksmith shops, saloons, bank, a mercantile, post office, and churches. A Baptist Church is still here in fact. We are just trying to reconstruct an Oakville microcosm around the square to compliment the old stone jail to give people an idea of what an old west town was once like.”

Tapping numbers out on his fingers, Albert came up with 28 beds available for rent. “And that’s not enough when we have weddings and deer and bird hunters throughout the year.” Albert emphasized how the project evolved since they began working on it in 2004. “Our goal was to fix up the old jail house and preserve a piece of Texas. Mari handled the decorations and I did all the rest with the help of contractors.”

There is still room for several more houses which the Davila’s plan to add. Albert plans to put a public restroom in the center of the square and the next house they plan to move onto the square is the old Goebel house offered them by the family. The house is still sitting in a pasture where it was built. Albert said it is going to take some work and money to move it, but “move it we will.”

Asked about the new historical marker for the Oakville Jail, Albert emphasized he and his wife were honored. “We never thought we’d see anything like that on this property. And it’s all due to the hard work of the Live Oak County Historical Commission.”