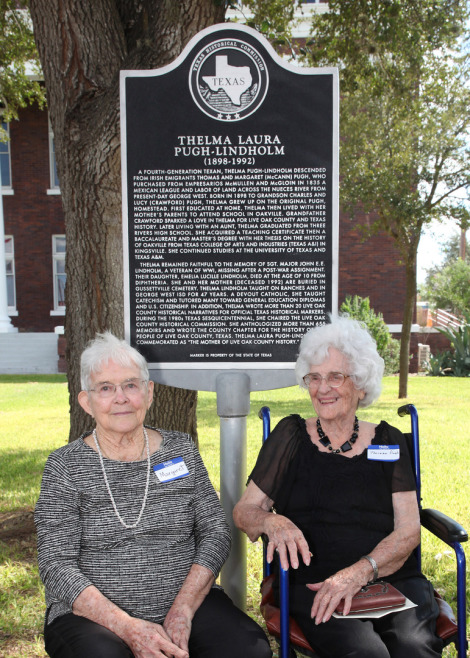 Margaret Pugh James and Theresa Henning Pugh. How glad we are that this fifth generation Pugh granddaughter and grandaughter in-law lived to see their Aunt Thelma receive this award from the Texas Historical Commission.

Margaret Pugh was born November 5, 1925 to William Felix and Dora Cecelia Grover Pugh. Thomas Pugh was Margaret’s great-great grandfather, and she was born on the Pugh Grant in Live Oak County. Margaret married James Francis (Jim) James in St. Joseph’s Catholic Church, Gussettville, Texas, November 28, 1948. Jim was the son of Guy and Angeline Goodwin James and the great-grandson of Bridget McGloin, a relative of Empresario James McGloin and one of the first settlers of Gussettville.

Margaret and Jim inherited acreage of the original Pugh league and labor of land and McGloin grant. She and Jim had two sons: James Francis “Jimmy”, Jr., and William “Willie” Pugh. Jimmy and Willie both graduated from Texas A&M, College Station earning distinguished student honors, Jimmy in Agricultural Education and Willie, magna cum laude, in Animal Science. Jimmy became a recognized South Texas cattleman, and Willie soon came back home to use his farm and ranch skills and work with U.S. Steel which mined Uranium in Live Oak County. Willie is now Live Oak County Commissioner for Precinct 3. Both Jimmy and Willie are married with grown children.

Margaret’s first years at school were at Marbach, close enough to walk from the farm and ranch. She and a few other students assisted Margaret’s Aunt Thelma Lindholm in teaching 61 pupils in the one-room school, nine grades. The upper grade students prepared their assignments and then helped the lower grade students. Margaret laughingly called it “team teaching”. The students’ desks were double. Margaret graduated from George West High School in 1942 as valedictorian.

As was true of many families in Margaret’s youth, her family had a pet donkey. The children liked to ride the donkey on good weather days. They had to take turns riding, and the oldest was first. Sometimes the younger children had to wait for another day to get their turn. However, sometimes the mule would let four of the younger children ride at once. He was a “little bit” ornery and would just sit down when he got tired. Margaret did not always land on a soft cushion..

After graduating, Margaret worked in L.S. Morrison store as bookkeeper until 1948. She taught a year in kindergarten and then worked again at Morrison’s until she went to work at the First National Bank (Now SouthTrust), George West in 1961. She continued working at the bank for 48 years until Jim’s failed eyesight required her to be at home.

Jim’s eyesight began to fail early in his adult years. As it grew worse, Margaret cheerfully took on more and more responsibility. She helped with the farming and ranching. Some say she could dig postholes and build fence as good as a man. Her Campbell nephews once challenged her to an uncrushable egg contest by squeezing both ends of an egg at one time. It is almost impossible to break an egg holding it like that, but the boys lost the contest to their great chagrin.

Beyond her care for her husband and sons, Margaret constantly expressed her love to her greater family and friends. Lamar James, her nephew, tells how she made baby blankets for his and wife, Tessie’s, five children and thirteen grandchildren. Until her last years, Margaret was always at church with food from home for every occasion that called for it.

Margaret had a passion for history. She participated in the Live Oak County Historical Commission, and saved many photos, newspaper articles and artifacts from her family. Among other things, she carefully saved many items collected by her Aunt Thelma. She willingly shared the letters, articles, and photos with anyone who wanted to copy them, making it much easier for that history to be shared.

Margaret Pugh James was steadfast in family, friendship, church, and community. She will be greatly missed by all that knew her.

Before the Pugh Family from Ireland set foot on Texas soil, dark clouds were gathering over British controlled Ireland and Mexican controlled Texas. Mexico won its independence from Spain August 29, 1821. Yet, unable to manage the far regions of Texas and Coahuila, the new Mexican government was ineffectual in answering colonists needs for education, protection, and adequate supplies.

Ireland was disillusioned in its quest for independence from England. Continuous famine and agrarian unrest troubled the Irish countryside, especially the Catholics who faced constant British religious and political discrimination and were not allowed to hold public office until 1829. Three Mexican attractions for Irish Catholics who fled their homeland were Mexico’s Catholic religion held in common with them, the promise of fertile land ownership, and freedom from British oppression.

Across this backdrop, Margaret Pugh James' Irish American family’s history began while Texas was still part of Mexico and before the effects of the Irish Diaspora were fully felt in America. Thomas Pugh (spelled Pew on the ship manifest), Margaret's great-great grandfather, came with the Irish in the late 1820’s.

Thomas Pugh, a farmer from County Cork, Ireland, arrived in New York December 6, 1827, aboard the Dublin Packet. Before leaving New York for South Texas, Thomas obtained American citizenship. Pugh’s family is not listed on the December 1827 Dublin Packet manifest. It appears that his wife, Margaret and first born son, Thomas Jr., may have come later. Their second child, daughter, Margaret, was born 1833 in New York.

By 1834, Thomas and Margaret McCann (Some early documents spell it McCan.) Pugh with their children, were recruited by James McGloin to become McMullen-McGloin Grant recipients. Their family met Mexico’s Irish Catholic requirement for the McMullen-McGloin Colony in Texas. They boarded the schooner, Messenger, that same year and sailed around Florida to Texas’ Copano Bay (Northeast of present day Corpus Christi between Bayside and Rockport in Aransas County).

As participants in the McMullen and McGloin San Patricio Empresa, the Pugh’s were promised a league (4438.4 acres) and a labor (177.1) of land for combination stock raising and farming.  High winds and rough seas compelled the Messenger’s captain to turn back in favor of docking at New Orleans. Thomas Pugh’s and Mark Killelea’s (also spelled Killely) families were the only two families from that journey of the Messenger who embarked overland by ox cart from New Orleans to San Patricio. Along the way, it was necessary for the Pugh’s to seek refuge first at Mission Refugio and then Victoria where their third child, William, was born. Then they made their way to San Patricio.

In San Patricio, the Pugh’s learned that they must wait with other emigrants to receive title to the land. Land Commissioner, Jose Antonio Saucedo, issued some grants in 1831, then left and apparently died. So in 1834, when the Pugh’s arrived, they were allowed use of their land even though they did not receive official written documentation until June 30, 1835.

In her book, The Forgotten Colony, San Patricio de Hibernia, Rachel Bluntzer Hébert explains the great urgency many in the San Patricio Colony. Battles and war efforts continued around them even after the Texas victory at San Jacinto, and the Texas Revolution was for all other purposes considered finished.

The Refugio Mission had just survived a Lipan raid before the Pugh’s arrived from New Orleans. Once in San Patricio, Thomas became active in civil affairs of the Colony. He wrote a testimony regarding his family and that of Mark Killelea’s so that Empresarios McMullen and McGloin might qualify for bonus leagues of land. However, no family writings or records reveal his joining war efforts while caring for his growing family and tending the new farm and ranch. Even so, he was reportedly the last colonist to leave San Patricio and seek refuge in a safer location after the Battle of San Jacinto. Most colonists had already fled fearing reprisal as the Mexican Army retreated. Three other children – Patrick (1839), Catherine (1844), and Bartholomew (1845) – were born on the homestead on the East bank of the Nueces River.

In 1855, Thomas met with other men under the sheltering limbs of a large Live Oak Tree, now known as the “Charter Oak”, in the Gussettville area to officially discuss becoming a separate county from San Patricio County. They felt the need for home government without fearing Indian, Mexican, or American outlaws on their perilous trips to San Patricio count seat. When Live Oak County was established and cut out of San Patricio County by the Texas Legislature in February, 1856, Thomas served on the first Live Oak County jury.

Our organization is richly endowed with a number of living emeritus members, and the legacy of those gone on continues to thrive in Live Oak County. We wish to express our gratitude for their years of service on this page. 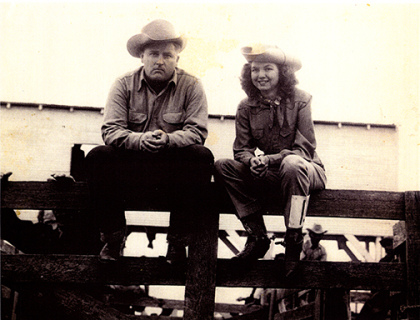 Tige and Charlie Reagan Brown circa 1946

Another Cowhand gone to the Last Roundup.

Charlie (Charleen) Reagan Brown left the Brush Country she loved January 6, 2015 for the last time. Once again, she is with Tige Brown, her lifetime love, husband, and father of their three children. RIP, Charlie. The Brush Country will always remember you.

Among other things, Charlie was the first woman to graduate in Texas with a degree in agriculture. She is an alumnus of Texas A&I University, now Texas A&M at Kingsville. Some alumni did not appreciate the name change..."A&I till I die", Charlie often said. She stabled her horses at the famed King Ranch stables while attending A&I. Among her rodeo accolades were barrel racing and cattle cutting championships. Also known as the Rodeo Queen of the Valley, she was a trick roper, leather artist, middle school teacher, community and church leader. She is a current nominee for the National Cowgirl Hall of Fame. Her daddy, Pryor Reagan, a well known ranch foreman and cattleman, called his sons cowboys but always called Charlie his "cowhand".

For many years Charlie, her husband, Tige, and Thelma Pugh Lindholm teamed with other Live Oak Historical Commission members and together produced 21 permanent Texas Historical Markers for Live Oak County.

Their legacy lives on for all to see in these permanent rememberances of Live Oak's past. Thank you to each of the past LOCHC members and all who helped in these efforts.