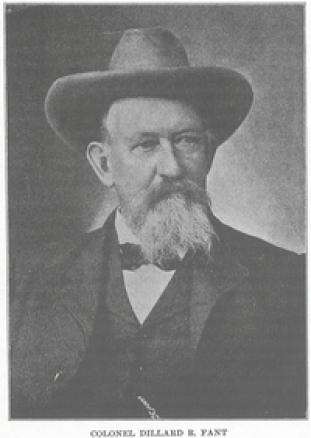 [Fant City, Live Oak County, was named for Dillard R. Fant. Fant City was built on land once belonging to him. Fant began his fortune as a trail driver.]

Dillard R. Fant was born in South Carolina in 1841, but his parents settled near Goliad eleven years later. When Dillard was fourteen years old, he began working with the teams of oxen that hauled freight between San Antonio and Goliad.

During the Civil War he served in the Texas Cavalry, and returned as Colonel Fant. In 1866 he went into the cattle business in a big way. For the next fourteen years he drove about 200,000 cattle up the trail to the northern markets. In 1884 he engaged in one of the largest cattle drives ever-several herds totaling 42,000 cattle (costing $12-20 each) made the drive to Wyoming.

Fant  continued his own cattle business in Goliad County, and improved his stock by introducing Durhams and Herefords. He was said to be the second man to fence a pasture in Texas (1874). Eventually Colonel Fant owned over 700,00 acres of grazing land in various parts of the state, including 60,000 in Live Oak County. Fant hired Peter Kerr to build a dam on the Sulphur Creek in exchange for a hundred yearling heifers. The resulting reservoir, known as The Big Tank, covered a hundred acres, and it remained until washed away by Hurricane Beulah's floods, three-fourths of a century later.