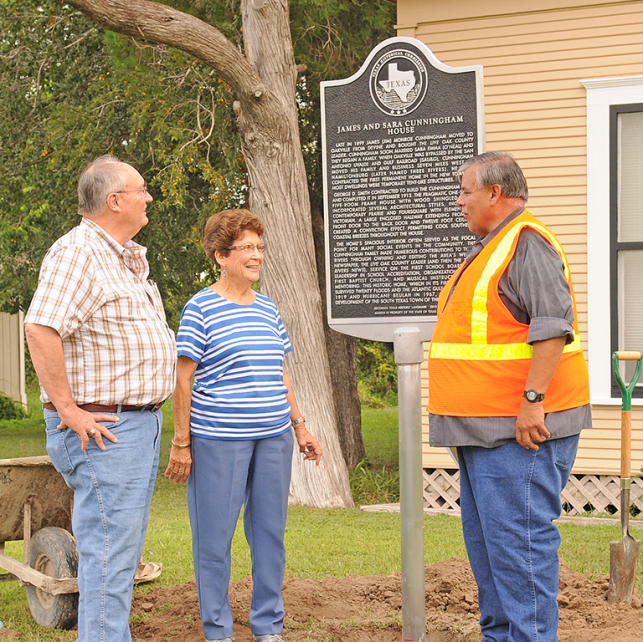 After the Live Oak County Commissioners' Court approved Betty Lyne's request for Richard Hudson as Marker Chair, he submitted two requests to the Texas Historical Commission. The Three Rivers' Centennial was coming in 2013. First, he submitted "Loma Sandia Cemetery", a prehistoric Indian ceremonial funereal site just three miles from Three Rivers as an "Undertold Story Marker". Second was the first home built in Three Rivers, the James and Sara Cunningham House awarded as a Registered Texas Historic Landmark. Above Hudson, Betty Dickinson, Cunninghams' granddaughter and marker sponsor, and Joe Mendez with the Three Rivers City Maintenance department look at the marker after it is installed in the front yard of the home. Photo taken by Roberta Dobie with Hud's camera. 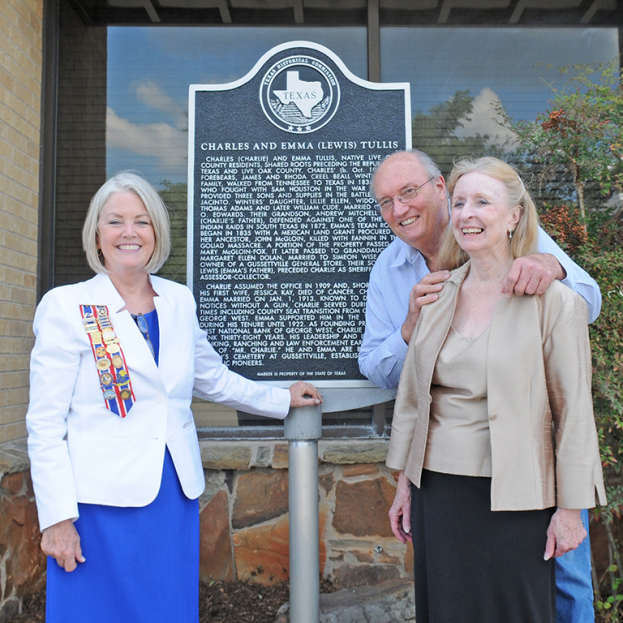 The second set of markers after the turn of the century addressed the George West Centennial the following year. Here Leslie Walker, granddaughter of Charles and Emma (Lewis) Tullis and Tullis Subject Marker sponsor, stands having fun with Richard and Janis Hudson after the Tullis Marker's unveiling in front of the SouthTrust Bank across the street from Live Oak County's Courthouse. The second marker for the 2014 Centennial was the Chauncy and Minnie Canfield House. It is a graceful Southern Colonial that encases the original Canfield home, the first house built by a family in George West. It is also a Registered Texas Historic Landmark. Sponsor for the Canfield marker was Robert Canfield, grandson of Chauncey and Minnie. Photo courtesy Live Oak and McMullin County Progress staff.

Ask Richard “Hud” Hudson why he puts so much energy into writing about Live Oak County, and he will tell you, “It’s family.”

Hud’s earliest connection to Live Oak county began in the early days of Irish immigration to Mexican Texas before the state of Texas and Live Oak County were birthed.

Hud’s Brister, McGloin, and McMurray ancestors are buried at St. Joseph’s Cemetery near Gussettville. Then in the Texas Revolution, Nathaniel Brister, Fannin’s Adjutant, died with Fannin at Goliad. These are his mother’s side.

Hudson grandparents came to Simmons from East Texas in the nineteen twenties. Forrest and Lola Hudson, Hud’s grandparents, raised a family of eight children. They all graduated from Simmons or Three Rivers High School. Many of those cousins still have children and grandchildren in the county.

“Dad was a Tool Pusher,” Hud said. “We lived all around the area. I spent most summers and every weekend possible with my grandmother and cousins out at Simmons and some in Three Rivers.”

“Loved to stay with Granny, hunt, swim wherever there was a tank and at Tipp’s Park In Three Rivers (no alligators then). Aunt Thelma’s Sunday fried chicken was absolutely heavenly. Guess that’s because she sang hymns over it while frying it, and after hearing Cousin Philip sing at Simmons Church.”

Most of Hud’s adult life has been in Fort Worth, Texas. He and his cousins are still tight. Hud has a Master of Arts in History and Journalism from University of North Texas in Denton. He is an award winning writer and photographer.

Among his journalism work, National Geographic was his most exciting followed by Popular Science, Fort Worth Star Telegram, and Radio Shack Intercom.

About 2008, seeing photos on one of his websites, Arcadia Publishing asked Hud to write an illustrated history of Live Oak County. He and his wife, Janis, spent the next two years visiting almost 100 families in the county and another two years in writing it.

Hud said, “Meeting families from all parts of the county gave new insights and helped us see just how important it is to preserve this county’s history.”

During that time Live Oak County Historical Commission (LOCHC) Chair Betty Lyne asked Hud to be Marker Chair. The LOCHC had been inactive for about twenty-eight years.

With the help of Judge Jim Huff, Jim Warren, Sue Denniston, and more than I can name here, Hud was able to get things rolling again. Since then he and  his wife Janis have written 16 markers for the county with six more in queue.

Asked if one marker stands out in his mind over the rest, Hud says, “Every one has unique importance. We enjoy meeting folks, researching and writing each one.” He continued, “It’s intense working with people who provide information, photos, and finances for these markers. And after getting to know and working with folks, it’s hard moving on to the next challenge. But, we look forward to it with equal enjoyment and expectations.”