Evergreens like Pine, Cedar, and Fir are not available in every habitat. Folks in warmer climates sometimes choose to live their lives in amazingly different but similar ways to the rest of us. This story from the Reagan-Brown family of South Texas transposes not only the Christmas tree but family in a beautiful and notalgic manner. 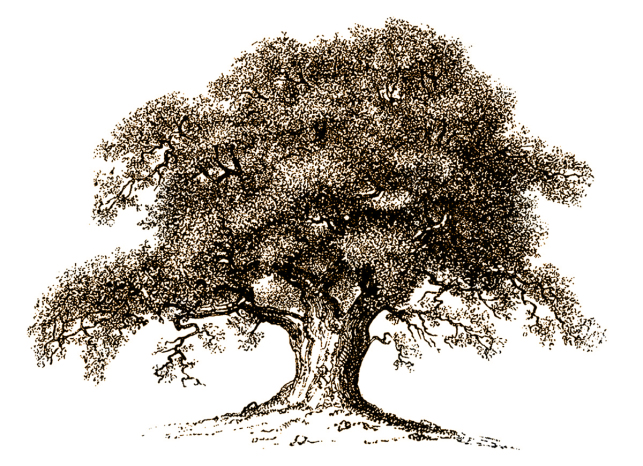 For days before Christmas there was a hustle and bustle and a busyness with whispers and secrets among the older ones at home at Grandma’s and Grandpa’s house. There was the wonderful aroma of the good things being baked in the kitchen on the old wood stove that sat in the north end of the kitchen. Fruit cakes were baked and wrapped in flour sacks and put in the pantry for that eventful day when all the children and grandchildren would arrive.

Finally the day came to get the tree. I can’t remember who got it, but I do remember that there were several men who brought it down the long hall to the large back room on the south side of the house. Every piece of furniture had been removed because this live oak tree filled the whole space with only enough room for all of the family to stand in a circle around the tree. It almost touched the ceiling. Upon setting up the tree, we children were then not allowed to go into that room until December 24th.

As I remember, Aunt Jessie, Aunt Winnie and Aunt Eccie were still unmarried and at home. We children were just “itching” to get into that room where there was so much secrecy, but we always got the door shut in our faces and were told in very emphatic words that we were never to open the door and peep in.

They tried to keep us busy by running errands for them. They were the ones who decorated the tree. All the grownups would go in and out, but we children had to be content with anticipation of that which was to come.

Finally, Christmas Eve arrived and as I remember all the family was present except Aunt Verna and Uncle Leslie who lived at McKinney, Texas. She had lost her first child and now she was pregnant again and the doctor would not let her travel.

But back to the Christmas tree – it looked like something in fairy land. I had never seen anything so beautiful. The evergreen oak tree had many, many, many lighted Christmas candles fastened to the tree branches. There were so many that they needed no other light in the room. We children were not allowed to go rushing ahead into the room. We all went orderly, all grandchildren with their own parents. Grandma and Grandpa were there to see us all come in. We were told not to touch anything – just stand at the foot of the tree. We had to watch our steps, so as not to step on the packages as we all threaded our way around the tree, then stood back by the walls of the room. There were many packages hanging in the tree among the strings of popcorn, the hanging pieces of fruit and lighted candles.

I can’t remember who handed out the packages, but it seems it was the single girls living at home. There was a pile of torn wrapping paper on the floor after opening packages. All we grandchildren got lots of firecrackers to shoot the next day. We all got some “penney"candy with bags of fruit and nuts. Of course there were other gifts, too. I remember that I got a new winter coat and a gold signet ring with the letter “B” on it. I was ten years old.

The next day was Christmas and everybody was up early and doing around. It was a happy time. Good smells began to permeate the air as the breakfast was over and the preparations for the dinner began. The pretty tablecloth was being put on the long dining table along with the cloth napkins at each plate. Grandpa sat at the head of the table and presided over a sumptuous meal.

After lunch, Herman got the shovel at the fireplace and got it full of red hot coals and all of the grandchildren followed him out to the southeast corner of Grandpa’s vacant lot south of the house where he put the shovel on the ground and all we kids unraveled our fire crackers and gathered around to pop them.

All the “grown ups” visited and talked about Christmas until it came time for us all to gather up our “things” in preparation for going back to our homes after an unforgettable Christmas at Grandpa and Grandma Reagan’s.

Shared by Charlie Reagan Brown with

Thanks to Bernice Peterson LeFors