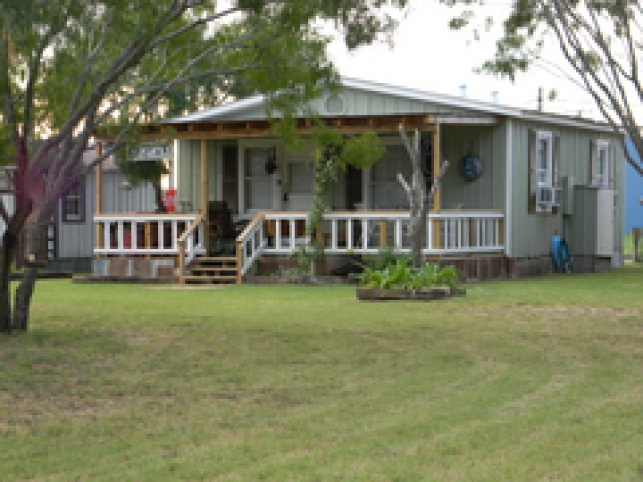 The Mercantile, originally built on the Oakville Square by Slim Rosebrock circa 1938. It was built from lumber in the old Oakville Courthouse said to be "rock solid". Some of this lumber was also used to turn the upstairs of the jail into bedrooms and bathrooms as the Rosebrock family made the jailhouse their home. and used this building as a store. Story by Lois Rosebrock reported to a Live Oak County Historical Commission appointee below:

"To visit Lois and Slim Rosebrock, you go to jail where they have lived since 1938. They lived there because they bought the Oakville Square complete with a large courthouse and jail after the county seat went to George West. At that time, the Oakville square returned to the heirs of Thomas Wilson who had on September 8, 1856, donated 640 acres of land for the Oakville town-site.

"Rosebrocks said they bought the square with water-well and buildings, including a thousand feet of heavy wrought iron fence, for $1,000.00. Then, they used materials from the courthouse to fill in two floors in the upper story of the jail; five bedrooms with baths are on the second floor and the third is used for storage.

"Presently, the couple is mostly on first floor where they enjoy having visitors. Often tourists stop to rest under one of the great oak trees, or to read the historical marker by the road.

"On the last Sunday in April, each year, the Rosebrocks’ yard fills with folks from near and far for a reunion; each bringing with them lunch to spread, scrapbooks to show, and chatter for the day.

"Slim Rosebrock came to Live Oak County with his parents, Henry John and Annie Elizabeth Rosebrock, in 1907.  He was born in Guadalupe County on February 21, 1904. The large family were [sic] truck farmers, raising all manner of vegetables, melons, and fruit; and also chickens and cows.

"The children went to the Oakville School, where the County Meet was held. Slim is the proud owner of the “overall winner” trophy. The school had to win it three years in succession. When the school was closed to consolidate with George West, Rosebrock was given this trophy since he was the star athlete.

"After finishing high school, he went to work for Monarch Engineering Co. in 1932 building bridges. He met Lois Sprott, and soon, they were married.

"Their identical twins named Selma and Thelma were born on February 29, 1936. The twins married brothers from Beeville. Fred Henry died in 1971 and his wife, Selma, died in 1973. They left one daughter, Susan.

"For about ten years, Slim operated a service station in Oakville but a heart specialist persuaded him to retire from that. Loving to visit people and to help with community events, they have never had a hard time staying busy. Both like to read and recall events in the past. Visitors to this historical place constantly ask—“Yes, my grandpa was a half-brother of ‘THE Jesse James’”, Lois says.

"At the 1982 reunion, Lois and Slim invited everyone to come back to their golden wedding anniversary which took place on November 19, 1982. And, now we have a great granddaughter, Tomorrow Stevens, who will be five in November. They all live in Houston but us.”

"Today, the adult grandchildren of Slim and Lois Rosebrock have fond memories of visiting their grandparents in the old jail-home and can even remember where special pieces of furniture sat." 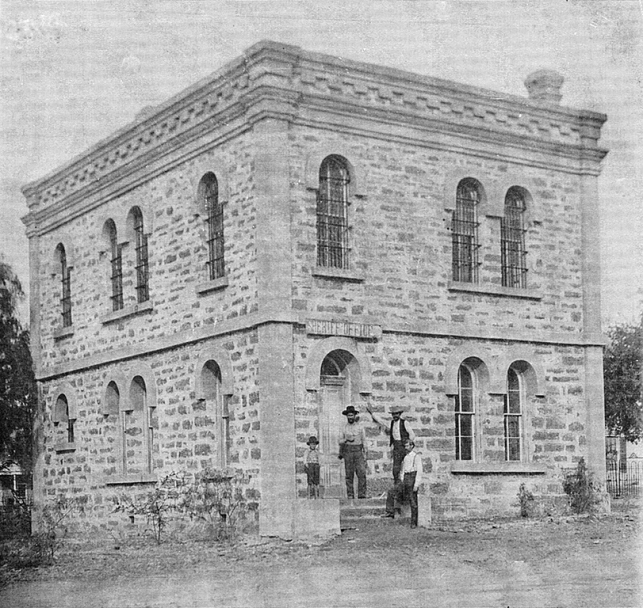 Old Oakville Jail as it stood with Sheriff office and living quarter through the front entry. It still looked very much like this at the time the Rosebrocks began making it their home in 1938.