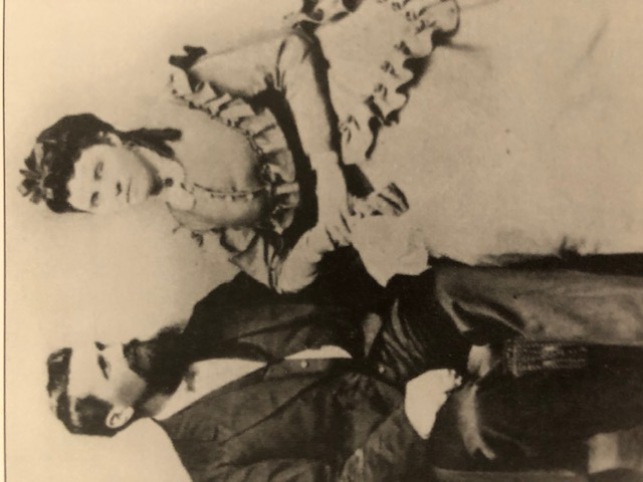 Sue East married Sylvanus Gerard Miller on January 31, 1870. Sue East Miller published her rendition of family history with Sixty Years in the Nueces Valley (1870-1930) in 1930. It's a fabulous read from beginning to end. One that speaks to us today. The Millers amassed a large ranch in the Nueces Valley in a multi-county area that includes part of Live Oak County. 21,000 acres are now Lake Corpus Christi. The Miller Ranch added many of those. A few heirs still live on original property near the lake. "Bone Lake" short story posted here because it, like the historical freeze Texas is experiencing in 2021, changed many lives and the economy of its time. Photo of the Miller's permission by C. Gerard Miller, Jr, Esq. Rendition by Richard "Hud" Hudson.

South Texas' 1870's were a rough and wooly time. Sue East had little idea what lay ahead when she married Gerard Miller and set out for Texas. What Sue East Miller (known as Mrs. S.G. Miller in her day) found was a beautiful valley and the ranch Miller had already established. Gerard turned out to be an entrpreneur before the word was common. He made a ferry crossing on the wide Nueces River used by many.

In their post Civil War times, South Texas was full of wild cattle called longhorns. Meat was abundant for the taking. The range was open. Only branding was necessary for cattle to be known as yours. Cowboys and vaqueros drove those cattle to northern markets to supply the North with food badly needed. This period created many wealthy men. Cowboys who missed seeing the business opportunity derived a deep knowledge of resourcefulness and survival.

Near the Miller Ranch was a beautiful lake. Below is Mrs. Miller's description of the deep freeze that caused that lake to be called Bone Lake:

"One of the most beautiful spots near our home in the early days was a small lake about a mile and half long, nestled among trees beside the main road and being a mile from our house. Later it became known as Bone Lake.

This name was derived from an unfortunate circumstance that occured in 1872 or 1874, I am not certain which year. On that occasion we had a terrible blizzard and a snowstorm following a long drought. Starved cattle by the thousands had drifted into the Nueces Valley from the less protected sections farther north and east. These poor animals hovered together by natural instinct but nevertheless were frozen to death in great drifts, their carcasses piled high on top of each other. Their bones stayed there in whitened piles for many years and gave the name to this lake.

For some years after I came to the ranch this lake was the site where all the cowboys camped during the spring roundups when they branded calves. There would be the boss with perhaps fifteen or twenty hands and about that many Mexicans [vaqueros] in the camp, and they would stay for two or three weeks.

Hardly would one group leave before another crowd as large or larger would come to do their branding, and to rebrand their own cattle which had received other marks in the meantime. At night many of these men would sit by the campfire and gamble through the hours of darkness. They had many a pistol fight, and many things transpired there that were hidden from the eyes of men. This would last three or four months out of every year until Mr. Miller bought the McGloin tract of land. But as the road near this lake was the public road to San Patricio and Corpus Christi, it still remained a favorite camping spot for travelers.

One day I heard a veritable volley of shots, and in a few minutes a white man appeared on horseback, racing toward our home as fast as his horse could run. He leaped from the animal and ran up to the house, declaring that a group of Americans had gotten into a battle with Mexicans, who were about to get the best of his party. For this reason he wanted to borrow Mr. Miller's pistol which he had brought home from the army. He promised to return it in a few hours, as soon as he and his companions could repulse the Mexicans.

In about two hours he returned with an old rusty pistol. As soon as I saw it I told him it was not the pistol I gave him. He asserted that it was, laid the pistol on the the gallery [porch], and left.

When Mr. Miller came home for dinner, I told him what had happened. He immediately got back on his horse, and with his double barrelled shotgun in his hands, started to the lake in spite of my peadings. After he had a short parley with the men camped there, a rough looking character stepped up and returned the weapon.

On another occasion, some years later, I heard another volley of shots. My son Rollo announced he was going down to the lake to see what happening. He mounted his horse and rode down there to find sixteen of my flock of one hundred and twenty-five white Holland turkeys shot down. He rode around to see who had done the deed, but the thieves had fled. He then brought the fowls to the house, where we prepared them for cooking.

One day a man drove up to the house in a wagon and identified himself to Mr. Miller as a freighter who had crossed the Nueces River on our ferry in the years shortly after the Civil War when there was so much trading with Mexico and when Jayhawkers were so troublesome.

'I brought my wagon up the river after crossing the ferry and came to a lake where we stopped to camp,' the visitor said. 'There I buried a big box of dry goods and money. But up to now I have never hqad aq chance to come back. This morning I went to the spot where I thought I buried the box, but could not find a a place that was familiar. If you will come and help me I will pay you handsomely.'

After a couple of hours' search they located the box. On taking it out they found the good in perfect condition still looking like they had just come out of the store. The man set the box in his wagon, and then inquired how much he owed him. Mr. Miller declined to take any pay.

There is another notable spot where sometime in the long ago a house was built, whether by Mexicqans or Indians, nobody knows. It may be the remnants of a chimney of the corner of a house that stands there, covered by soil. Whatever it is, it remains veiled in mystery of the past.

My first memory of Bone Lake is that of a wonderful fishing pool. We used to go there often, and in a short time catch a long string of fish. But in the last few years it has ceased to be a lake except after very hard rains."

There ends Sue [Mrs. S.G.- married title and huband's initials were used at time of publishing] Miller's tale of Bone Lake. :) Mrs. Miller's short stories, her 60 years in the Nueces Valley, and the autobiography she included of an American Revolutionary Soldier,  in an original hardback for $275.00 + $5.00 shipping. Last softback reprints from 2011 are no longer available. We'll try for some more serials on this website soon.