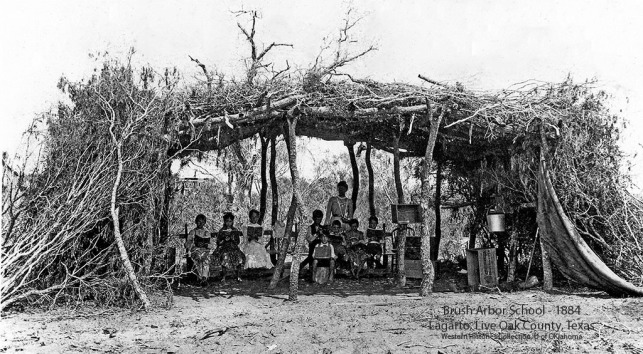 Lagarto College rooftop can be seen just above the children on the left. Rights purchased from University of Oklahoma. 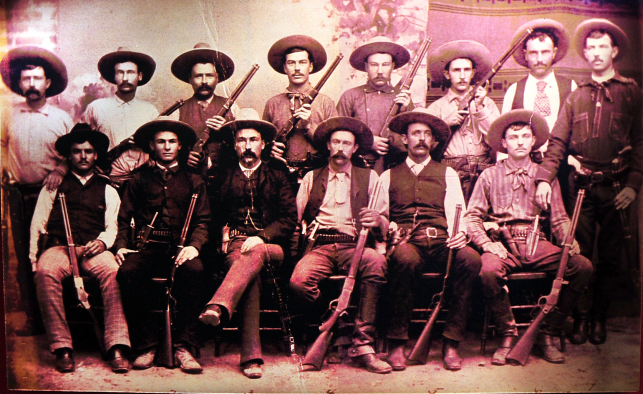 Company D of the Texas Rangers under the command of Captain Frank Jones. Fourth from the left on the back row is Charley Henry Vanvalkenburg Fusselman, who moved with his family to Lagarto when he was 11. At 22 he joined the Texas Rangers and in 1890 was killed by rustler, Frank Para, in the mountains near El Paso. Another prisoner was eventually exchanged for Frank Para from Sheriff Pat Garrett, and Para was later executed. The canyon where Fusselman was killed is named Fusselman Canyon. He is buried in the Lagarto Cemetery. Photo courtesy of Buckhorn Saloon, San Antonio. 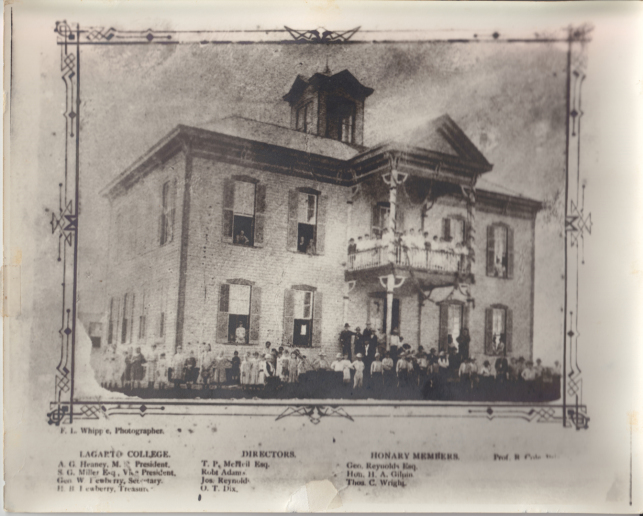 Lagarto College(1884-1895). Though the name "college" was used for some schools during this period, Lagarto like many others was actually a four room school, grades 1-8. Nevertheless, the school met high standards as Samuel Beall was awarded a Stradivarius by his violin teacher because of his excellence. Teacher, Miss Ella Byler, later married Richard J. Dobie, and they are the parents of renowned author, J. Frank Dobie. She taught first through fourth grades at Lagarto College from 1885-1886. The college bell that is believed to have hung in the belfry until 1895 when the school closed is on display at the remaining Lagarto School which is now used as a community center. Photo courtesy William Hinnant.

Lagarto is Spanish for alligator. The community of Lagarto is nestled in the arm of Lagarto Creek, which lends a semi-tropical atmosphere. Lagarto Creek flowed until 1880, and it was inhabited by numerous alligators which gave the town its Spanish name. The frontier town lies beneath a tangle of thornbush, prickly pear, lacy mesquites, crumbling rock chimneys and cracked underground cisterns. All overlaid with years of caliche dust and memories.

The Comanche and Lipan Indians, as early as 1458, found it a pleasant enough place to live, and evidence of attempts of colonization by the Spanish was found in the ruins of Fort Ramirez.

In 1835 Lagarto was a Mexican pueblo. Jacales made with thatched roofs and dirt floors were homes built along a creek on the Steadman place south of the town square. Mr. Steadman named the place "Sunnyside". H.B. Newberry called the creek Sweet Hollow for the sweet yellow berries found growing along the banks.

In 1856 J.W. Ramey, a saddle tree maker from Fort Merrill, came down to Lagarto and laid out the streets of the town around the public square. In the 1850s people began to come to the area. Some were on their way west and others were seeking grass for their herds. Many liked what they found and stayed. The first ranchers of the area were Judge Gilpin of Nova Scotia and Sam Beldin of New York who occupied Carmel Ranch and Bel-den Ranch, respectively. These ranches, as well as Addkinson Bend, had been owned by Mexicans who had for reasons of drought or Indians, abandoned them and returned to Mexico.

In 1850 Cornelius Clay Cox bought a ranch with a Nueces waterfront and called it "El Colimal". George Wright lived up the Nueces, Captain Dix on Loma Prieta Ranch and Charles Russell in the area.

Milton Dodson, Juan Vela, J.M. Grover, Peyton McNeill and Mr. Swearingen owned ranches along the Nueces River. Sterling Neblin Dobie, Sr. came from Buffalo Bayou and built his home along the river. (This ranch is now the McWhorter place.) Robert Dobie and Neville Dobie also came to Lagarto from Sussex County, Virginia. James Wrather came in 1866 and built a store of lumber and William Wrather came in 1873 and settled in the area. In 1859 S.G. Miller came from North Carolina and in 1870 he married Susan Frances East of Louisiana and began to develop the Miller Ranch.

In 1861 when the Civil War broke out, S.G. Miller, along with Bob Hardeman, Hank Sullivan, Mr. Williamson, Mr. Montgomery,  and others, enlisted in Terry's Texas Rangers. This organization became a unit of the cavalry under the command of Gen. Nathan Badford Forrest and fought throughout the war under that great leader.

The men suffered from cold, hunger and constant marching, with little rest and sleep. Many times they slept on wet ground. Back at the ranch again after the war, Miller was in ill health due to inflammatory rheumatism and neuralgia as a result of the war conditions, and on top of this he found his fine horses gone and his caretaker claiming his ranch.

While going through the legal procedure of regaining his place, he decided to establish another ferry on the Nueces River which was a full running stream and impossible to cross except by ferry boat. The second ferry was about five miles from Miller's house where the Lagarto bridge now lies inundated in Lake Corpus Christi. Miller's wife, Susan Frances East Miller, published a book in 1930, Sixty Years in the Nueces Valley, in which she tells of the couple's full married years (1870-1930) and their children. The book recounts the sad times mingled with extremely happy ones.

(This excerpt adapted from The History of the People of Live Oak County, Texas published in 1982 by the Live Oak County Historical Commission. 13-14.)