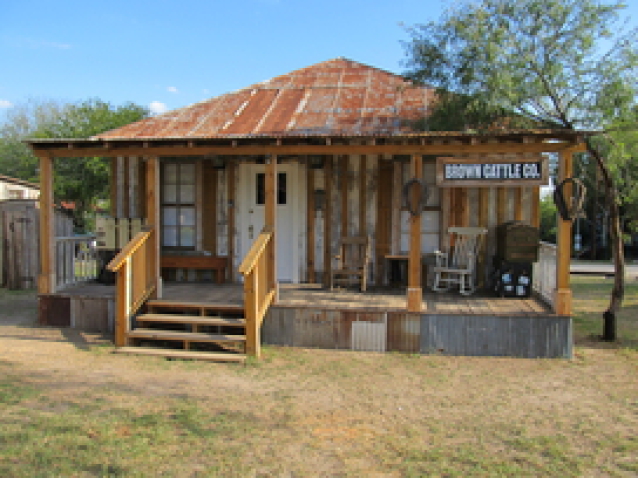 The Brown Cattle Company was established by Reeves Brown in the little town of Cornelia in southern Live Oak County sometime around 1919.  Enjoy the amazing family stories below, and check out other Brown stories on this website under "Cornelia" on the Live Oak County Communities pages.

Reeves Brown's great-great-grandfather, George Brown, was born in England, coming to America with his parents and two sisters. They landed at Charleston, S.C., secured a home and settled down to enjoy a life of prosperity and freedom.

The parents died shortly thereafter and as there were no orphans' homes at that period, the three children were bound out as slaves until 21 years of age. George Brown's descendants lived in Butler Co., Alabama, and Lauderdale Co., Mississippi, before moving to Cryer Creek community near Corsicana, Texas.

Reeves Brown's mother was of the De La Fontaine family from France. There were four brothers who were protestants and turned from the Catholic faith. We think two of them were burned at the stake for being protestants and that two escaped, coming to America on the famous Mayflower, a Dutch vessel passing by.

They were still afraid of persecution and left the "De La' off their name. One took the name of Fountain, the other Fontaine. One of the Fountain descendants was a surveyor and laid off the town of Pleasanton, Texas. The family lived there and in Lampasas where Reeves was born January 24, 1886, to Elizabeth Lee Fountain Brown and William Wallace Brown, on Reeves' mothers' ranch. Prominent names in the family history of Reeves are Fountain, Mason, Reeves, Cook and Lott.

Reeves and Emma Hale were married May 2, 1909 in Marble Falls, Texas. Reeves and Emma's first home was on the Turner Ranch on the Colorado River, north of Austin in Travis County. There, their first child, Bera was born. They moved to Lampasas, Texas, where their second child, Gordon, was born.

Reeves was foreman of a large ranch in Llano County before moving to South Texas in 1919. At that time he bought the Staples Ranch [in southern Live Oak County] where the family lived until Emma Hale Brown's death in 1966 and Reeves Brown's death in 1972.

After coming to South Texas, Reeves raised registered Hereford cattle. It was said that he brought the first really large registered Herefords to Live Oak County. His cattle were known all over Texas, and he shipped as far away as Wyoming and Montana.

During the first year that Reeves and Emma lived on their Live Oak County Ranch at a railroad stop called "Cornelia", the 1919 Hurricane hit Corpus Christi in September. The Browns were on an island [home was surrounded by water] for some three weeks.

During those three weeks, Emma's father was very ill and died. Messages came daily to Cornelia until all communication was cut off by high water. After the flood waters went down, it didn't take Emma long to get the ranch house moved to the top of a hill overlooking the valley, where it still stands [1982].

Emma's ancestry goes back to Germany. The family name was Slinkard. John Slinkard, Jr., married Catherine Wentz, and they lived in Newberry, Indiana, where their daughter, Anna Catherine, who married Isaah Hale, also lived. Their son, William Bynum Hale married Lucy Ellen Curry and came to Texas, making their home in Round Mountain, Blanco County. Emma was their daughter.