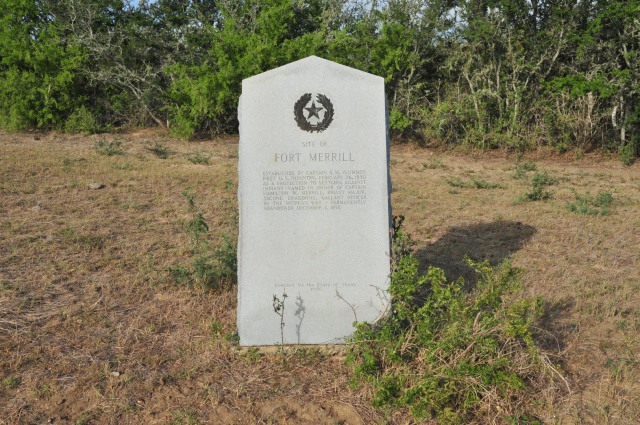 Fort Merrill is further recognized by the National Register of Historic Places after an application by the LOCHC prepared by Jim Warren, local Live Oak County archeologist circa 1988. Jim's narration of that event is located in the W surnames of our LOCHC Oral History Collection.

FORT MERRILL. Fort Merrill, located on the right bank of the Nueces River where the Corpus Christi to San Antonio road crossed the river, fifty miles above its mouth, was founded on March 1, 1850, by Capt. Samuel M. Plummer and companies H and K of the First United States Infantry. Lumber and logs used in the construction of the fort were shipped in from New Orleans, and the soldiers of the garrison erected the buildings. The fort probably was named in honor of Capt. Moses E. Merrill, who was killed in the Mexican War battle of Molino del Rey on September 8, 1847. Companies I and E of the Rifle Regiment were the regular garrison until April 26, 1853, when they were transferred to Fort Ewell, leaving only two noncommissioned officers and thirteen men at Fort Merrill. After 1853 the fort was garrisoned only intermittently. When W. G. Freeman inspected it on June 21, 1853, Lt. Alexander McRae was in command, but the garrison was so small that it could do no more than night sentinel duty. The fort was abandoned on December 1, 1855. Fort Merrill is off U.S. Highway 281, three miles northwest of Dinero in Live Oak County. [Located on private property.]

James M. Grover married Mariann McGloin, daughter of Empresario James McGloin, one of the first settlers in San Patricio from Ireland. She died and he later married Catherine Houlihan, also from Ireland. They lived at Echo, an early town in now Live Oak County, Texas. They owned a stage coach stop.

Among the first commissioners appointed to locate the site of Live Oak County were: William Gambel, John Powell, George W. Wright, Henderson Waller, N. Gussett, James Lewis, D.L. Wood and James M. Grover, who drew a map of Live Oak County that was appproved by the state through an act that not only created the County of Live Oak, but also attached it to the Fourteenth Judicial District on February 2, 1856.