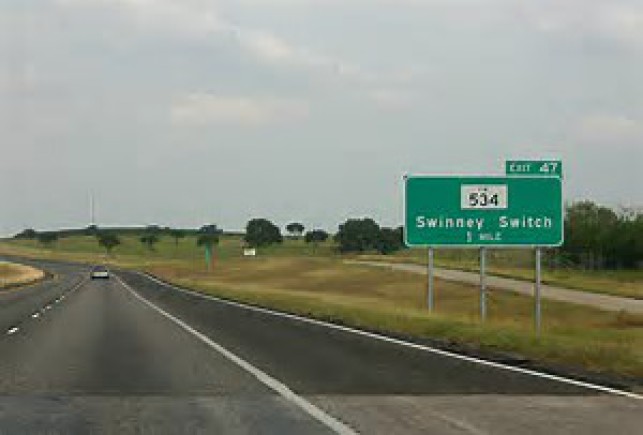 Swinney Switch is a rural community which began as a store at a crossroads in Live Oak County at the intersection of Farm roads 534 and 3024. It is twleve miles southeast of George West. For an upclose and personal connection to Swinney Switch, read Robin Selman's story of her grandfather, Sid J. Swinney, on Texas Escapes.

In 1917 Sid J. Swinney purchased about a hundred acres on a hill three miles east of Dinero. He opened a store which he called Swinney Switch, hoping the name would attract a railroad. During the Great Deptression Mr. Swinney carried people on credit as long as possible, but finally he had to close the store. Members of the Swinney Switch church, which he had helped bring into being, repaid as much as they could, and Mr. Swinney started up the store again.

Swinney Switch remains as far from a ralroad as it ever was, but it is at the intersection of FM 534 and FM 3024 (old Highway 9); IH 37 passes about a mile to the east. Dan and Faye Kohutek own the store and gas station that Goofy McCumber ran for a number of years. The Country Store and gas station, owned by Philip Poole and managed by Melba Rouse, is the only other business.

One of the most popular fundraising activities in the county is the Swinney Switch VFD's almost-annual wild game dinner. Another 1979 fund-raiser was a quilt raffle-the prize was a handpieced quilt donated by Kittie Bomar.

The fire department has had its share of mysteries-twice when the firemen started to answer a call, the truck would not start because the gasoline had been drained. The first time it happened, Harry and Cile McKinney's house burned, when it could have been saved.

Beside the fire station a road climbs the hill to the little stucco building that used to house the Swinney Switch Baptist Church. In 1932 Carroll R. Jones held a revival under a brush arbor that had been built by men of all faiths in the community. That meeting resulted in the organization of a church that for thirty years was very active. An article in the Southern Baptist Training Union Magazine told the many Bible learning activities in which this rural church was involved. The church met for awhile under the brush arbor, then built a small sanctuary. That building was rebuilt after being destroyed by a tornado, and then was replaced by the stucco structure. A small parsonage was also built.

On the hill north of the church, a road winds its way to one of the most charming roadside parks in South Texas. The picturesque rock fences were made for children to climb on, and lovers to sit on, looking out at Lake Corpus Christi and the surrounding hills and
valleys.

A few miles south of Swinney Switch is the ranch home of Harold and Ruth Wallace, which they estimate to be almost 150 years old. It was built of cypress which came by ship to Indianola, was hauled from there by oxen, and then was nailed together with square nails.
The Wallaces have made a few changes, but the old McGloin house remains basically intact. Above the eight room downstairs was a full attic where dances were held. So many people came to the dances that while they were there the floor had to be propped up with 4" x 4 "s.

For many years visitors traveling north of Swinney Switch along old Highway 9 were startled to see various species of exotic animals peacefully grazmg behind a deerproof fence. The J .I. Hailey ranch had the usual cattle and some cultivated land, but it also featured buffalo, crossbuffalo, elk, axis deer, and blackbuck antelope in a natural environment. The Hailey ranch has a large water tower, and the only known northern-style big red barn in Live Oak County. 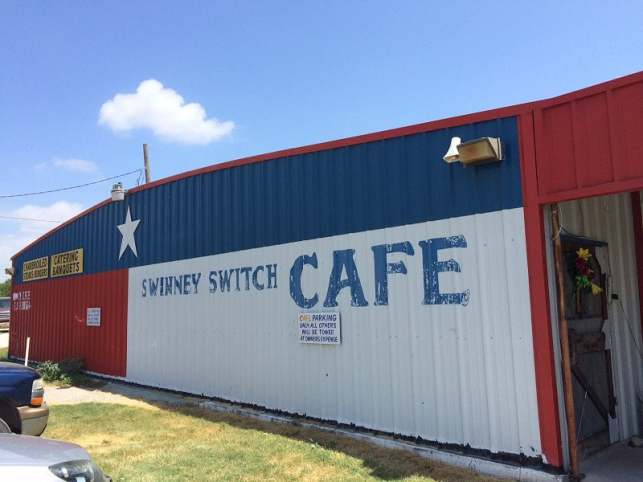 Swinney Switch Cafe serves mouth-watering Texas Brush Country buffets. They have consistent 5 star ratings from locals and those who dive off the interstate for an out of the way respite. Open only Thursday lunch then lunch and dinner Friday and Saturday. Sunday lunch. Lots of good eats all the time and music on certain days. Photo courtesy Richard Hudson.