Ross Harris is currently president of SouthTrust Bank in George West, Live Oak County. He serves as Live Oak County Historical Commission Chair and is an active member of the George West First United Methodist Church. He was sponsor for the Texas Historical Marker which graces the front lawn of the church. Ross and his wife, Novia Kinsel Harris, are partners in all their endeavors. 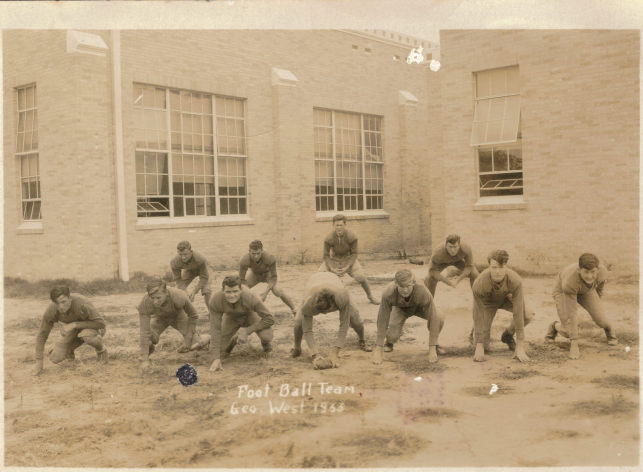 1933 George West Football team is a place holder until it can be replaced with a photo commensurate with Ross's narration. However, the editor promises a story to go with this photo soon. Harris narration below:

"Thank you very much, Glynis, for that introduction and welcome to all of you [audience]. Another historic event, this is our first oral history recording and production."

"My name is Ross Harris and I was born in Live Oak County. My great-grandfather and great-grandmother arrived from Hawkins County Tennessee in northeast part of the state with their nine children, and they came by train to Texas and settled on land that they had purchased the year before their arrival located north of Mineral in Bee County.

Their second son, Rufus, married Pearl Stroman in 1905. That would be my grandparents on the Harris side. Rufus and Pearl had seven children; their fifth son Stroman was my father. He and five of his brothers, this is a point of interest, attended Schreiner Institute in Kerrville, TX.

My grandmother Pearl’s father was born in Orangeburg, South Carolina. So, my grandparents Rufus and Pearl moved to Tuleta in 1920 from Mineral. In December 1935 they purchased part of the McMurray Ranch located between Oakville and George West on the east side of the Nueces River. Rufus was already ill when he signed the final papers purchasing the ranch, and he dies a few days later never to have set foot on the ranch after he bought it.

I was born in Three Rivers in 1946 in the hospital on the north side where a rock building still stands on Hwy 281. On the same day I was born a bus passenger went into labor and was taken to the same hospital. Perhaps it was the turmoil of the day of a small hospital that was probably understaffed or perhaps a product of a busy physician with a well-established taste for alcoholic spirits. But for whatever reason, a mistake was made on my birth certificate. A mistake that my father did not mid sharing with anyone who would listen. This mistake, however, was no laughing matter to my mother, and it took over a year to get a corrected birth certificate to replace the original which said that my mother was a gypsy and my father was unknown. (Laughter)

My parents moved from Three Rivers to the ranch in 1952, had their daughter Karen that year, and lived the rest of their very happy lives in the house they built. I attended George West High School.

We had a head coach by the name of J. D. Centilli, and his number one assistant was Howell Coleman. The coaching staff was very innovative, and they developed several methods and devices to improve a player’s skills and fitness level. Thankfully none of those tools or strategies are used today. (Laughter)

One of those exercises to improve one’s speed, a weak skill of mine, was to get the body moving faster so that the slower athletes could get the sensation of speed and learn what they could do to overcome their snail like velocity. If you get that velocity up, then you would realize it was said, that all it was just a matter of picking your feet up and putting them down faster. And, so therefore, they thought in 1960-61, that taking the 1954 Driver’s Ed car and putting a ski rope to the back bumper would serve that purpose. So around they would tow you with the idea that you just needed to pick your feet up faster and put em back down.

If you think of a skier in your mind, a water skier, they are leaning back, and as I recall that was the instruction when I learned to water ski is lean back and don’t lean forward. So, that is what I did and because the vehicle is pulling you forward and you think you are just going to go face forward. But that never happened to me because I never held on to the ski rope. They didn’t thank God, tie my hands to the ski rope. And so, as you can understand, that is far as I know is no longer used in the athletic department at George West High School.

As I finish, and I have a story or two more. This is my wrap up, it is in memory of Beto Lopez, one of the first storytellers at Storyfest. Newborn, Beto Lopez, told the story that at birth he was in trouble. His mother had been ill for the last three months and could not nurse her son. He was suffering. The ranch foreman, Sam Warner, heard of the baby who was on the George West Ranch that was in critical shape.

So, the Sisters went down and visited the baby and saw that he was malnourished and thought they had the answer. They told the mother and the family that they were going to see that a goat was brought that would have milk for the baby Beto. So Beto, told the story and using his dialect, not my version of accent and dialect. The women visited his mother three or four days later to see how the baby was doing, and they cried out, "Oh, no, you are supposed to milk the goat first!" (Laughter) The baby was nursing the goat.

I couldn’t think of a worse story to finish my remarks. I want to introduce Lamon Bennett to tell us a little bit about George West."