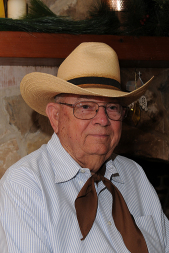 Jim Warren is currently Chair of Archeology for the LOCHC. He previously taught archeology at now Coastal Bend College. Jim was also President of the Texas Longhorn Breeders Association of America. He and his wife, Joyce Lauderback, with their sons, Wade and TE, found breeding registered Longhorns a way of living on their ranch outside George West, Texas. Jim is still active in LOC civic affairs and the George West First United Methodist Church. (Photo by Richard Hudson, 2015.)

"I am so happy Jim wore his coveralls because that is his signature outfit. Mr. Jim Warren is a state archeologist and has done digs in Live Oak County and all around the state and world. If you sit with Jim very long, you will hear some fascinating stories. Today, I asked Jim to tell us about his favorite dig in Live Oak County, and that will be a surprise." 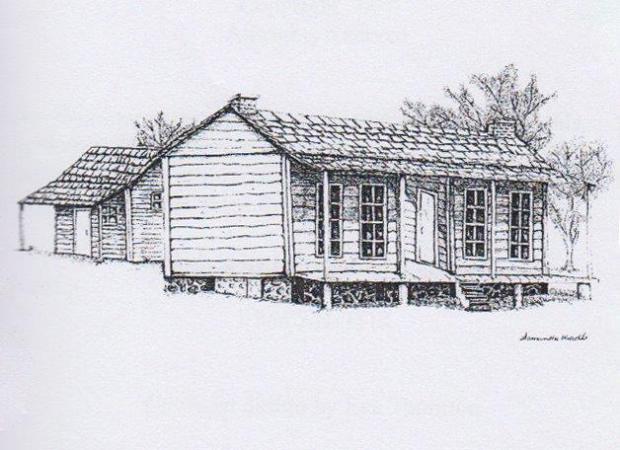 From: James E. Warren. The Fort Merrill Letters. Crosby, Painted Word Studios. 2007. This rendering of the Commanding Officerr's quarter's at Fort Merrill is thanks to Samantha Koedel. She drew it "from the original done by someone at the fort (company clerk?) and attached to a letter to their headquarters in San Antonio, Texas in about 1850." 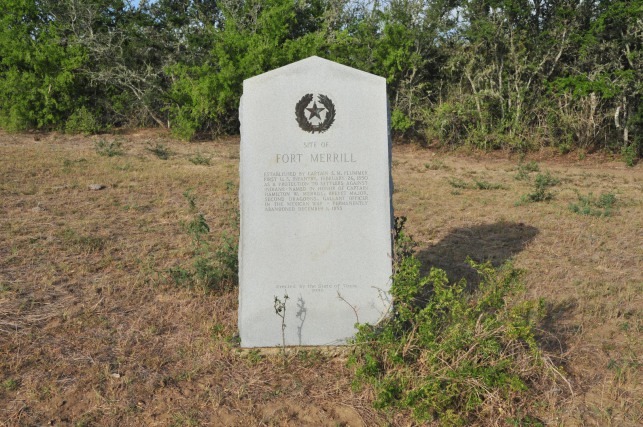 Well, I have been in the archeology business for 50 years, and I retired about three years ago. I have been a lot of places and seen a lot of things. When I was first asked to give a talk today, I thought she wanted me to talk about the most interesting job I ever had been on. Right away I thought of a job we did in Israel a few years back, but about a week ago we were talking about this and she said, “No, in Live Oak County” so I thought about Fort Merrill.

Back in 1988, when the Live Oak County Historical Commission [Archeology Project]  was first getting fired up, they were interested in having Fort Merrill entered the National Register of Historical Places. To that, they had to have an archeological survey on it and publish a report and everything. So, we made a deal with them and went out there and started to work. We did a lot of work with Washington D. C. where they had all the records for the Fort, and they had some plats where people had drawn maps for the Fort, so we knew quite a bit about it.

When we first got out there, we were surprised to find out that in 1950’s the guy that had the lease on the place [Live Oak County Ranch] for deer hunting had gone in there and root plowed the whole thing. So, everything that had been there before was gone except in areas next to a pretty good size creek that ran down through the hill. The Fort was built on a side of hill right over the Nueces River, and there was a pretty good size creek that came down through the Fort and went into the river. They didn’t root plow that area because it had a lot of brush on it, and they didn’t want to clear it up because it might cause the water to wash away some things.

We started work out there, and we did a metal detector survey of the entire place first to see what we could find. We found a lot of musket balls and brass buttons, broken glass and things like that. But, there was not evidence of the buildings that had been there. The Fort itself was built in a square and the building they were all the way around. In the center was an area where they did the practice marching and riding their horses and things like that. So, we decided to look over to the creek and see what was left over there because it showed that the building started about where the creek was and went across and then went down the hill nearly to the river and back around this side and up the hill again over on the left.

We dug down 6-8 inches, and we found the foundation to a building. The foundations were made from sandstone which was quarried ¾ a mile from the Fort. They had some bricks that were made on the place. The Fort itself was built in 1850 by a bunch of soldiers from Fort Brown in Brownsville. They had a carpenter and brick layer from Corpus helping them to do things right. All the work was done by the soldiers themselves. They even made the bricks. They dug up clay close to the river and burned it in a fire and made a brick out of it.

The building that we found turned out to be the commanding officers’ quarters. What it was is a log building with breezeway in the middle, and a room either end where it could hold two officers. On either end was a fireplace and chimney. The fireplaces were made of the bricks they had made on the Fort. Then behind the building, there was another building back there which the place was where they cooked their dinner for the officers. On the side of the building there was a chicken pen, so they could have fresh eggs and a chicken now and then.

Across to the right, there were two more buildings for officers. We didn’t find any evidence of them except square nails and things like that. One of the things that happened was that when the Fort was abandoned in 1855 there was a lot of people that lived up and down the Nueces River that had come from up in the North and the Northern Army and had fought in the Mexican War. Mexican War was from 1844-48. Then when they let them out of the army down in Brownsville, a lot of them decided that this was a pretty good place to live down here. It doesn’t snow or anything like that, and the land was cheap. So, they bought them a place on the river and were building their houses so when the Fort was abandoned, they said, “Hey look at all that lumber there!”

They came in there and carried everything away but the foundation. The root plow tore it all up. We got over to the corner and took a turn downhill, and the first building in that area was a hospital. and behind the hospital was a cook shack and little building were matrons stayed. They had a lady that oversaw the hospital, and she lived right there behind the hospital. Coming on down the hill on that side was where the horses and mules were stabled, and they had a big arena that was big enough to turn them loose in and two to three small enclosures where they could work on them.

When we were looking through the records, we found the records of every report they had ever sent in indexes in Washington D. C. These said that at one time they had 140 mules on that place. The reason they had all those mules was that they oversaw picking up things from Corpus Christi that had been shipped down from New Orleans, and they would break them up in pieces and deliver them with a wagon to the other forts in Brownsville, Rio Grande City, Laredo and one up close to Uvalde. They oversaw hauling goods to all those places, so they had a lot of mules.

The Fort made a corner at that point and went over to the left. The first little building that we found, and we found the remains of it because it was on a smaller creek than the other creeks, and they never did clear up the creeks. It turned out to be a bakery, and it was 11 feet square. They baked bread, and it was the same as in the Navy used to have, hardtack. This was hardtack. They would put it in wooden barrels and save it. When you went out on a survey from the Fort, you drew your food, and they would put some hardtack in there with you.

So, the next little place that we found, we didn’t find any foundations, but we found a lot of horseshoe nails, so we figured this must be where the horseshoer had his country. Then at the end, where it turned and went back up the hill, there was a commissary where they kept the groceries and things like that.

Coming across there, I forgot to say that they had the quarter for the enlisted men. There were long buildings and had kitchens right behind them. Then it started up the left-hand side, and the first building was the office, and it had library in it where the soldiers could check out books and take their time.

We found those remains, and I wrote up a report and sent it in. Sure enough it was approved. So today the Fort Merrill is listed on the National Register of Historic Places. So that is about it.

[Besides Historical Archeology at Fort Merrill, Live Oak County, Texas (1990), Jim Warren is the author of two historical fiction books based on his research for the Fort Merrill National Register Designation: The Fort Merrill Letters. Crosby, Painted Word Studios. 2007; and The Falls of Miquihuana (Meek-ee-wana). Fort Worth, Agarita Publishing. 2014.]