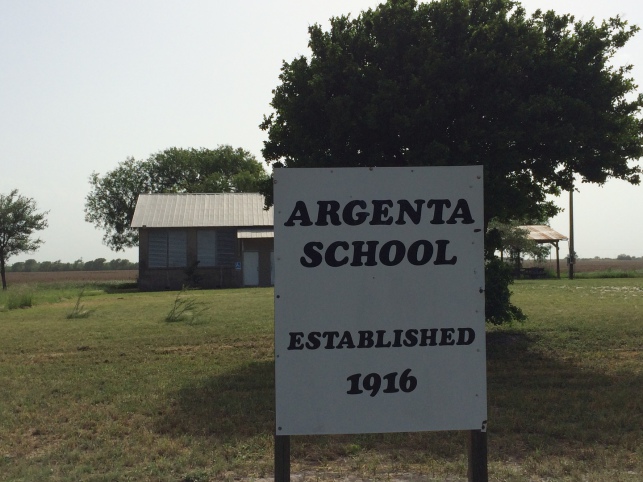 Argenta continues preservation and use of its school and church. Families and organizations may use the school for events. Photo courtesy of Mary Margaret Dougherty Campbell. 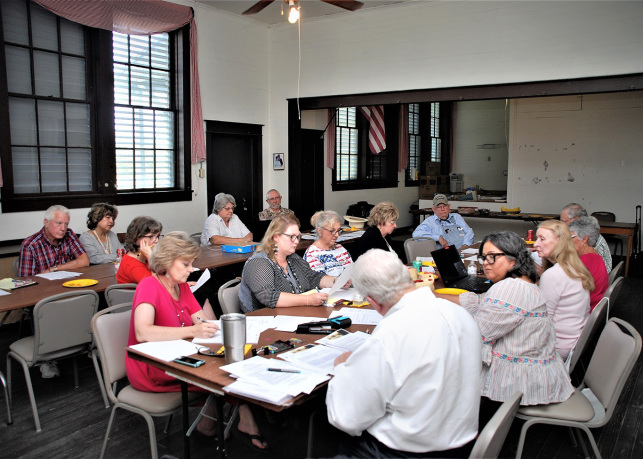 Argenta, Texas once had two stores, a blacksmith shop, a corn meal mill, a post office, church and school. Now, there isn't much left.

In 1904 J.B. Bonner and wife, Laura, came to this area from North Arkansas and purchased about one section of land from Charles Potter, the original land agent in this part. The land was part of the original Skidmore Ranch. J.B.Bomer was followed by his sons, E.T. and J.M., and later by R.A. Rouse and sons, Ed, Zalmon, Albert and Lum. In February, 1906, the Jesse N. Nelson family moved in from Buford, Arkansas, on the same train with Mr. and Mrs. Jim McEachern.

By 1908 a post office was established and the little community became Ego, Texas. This name was changed later to Argenta. When J.M. Bomer was postmaster, with the post office in his home, the members of the community wrote to John Garner, who was then Congressman, to have the name changed. They did not like the of "Ego" and chose the name of "Argenta" as that was the same of a town right across from Little Rock in Arkansas.

The Rev. C.W. Sewell of Corpus Christi held the first revival meting at the home of J.B. Bomer in 1906. It was a similar religious gathering that J.B. Bomer called for cooperation in building a church. Men of the community joined in with their wagons to haul the lumber from Skidmore, and so Argenta got a church. A congregation has met continuously since 1906 in the Argenta Community, and it is reportedy the oldest congregation of the Church of Christ in Texas.

The original school was built with the funds from the original trustees. Judge W.W. Caves was County Judge. Lumber for the original building was ordered from Arkansas by R.A. Rouse. Some of that lumber was still in a barn on the Jim A. Nelson place in 1972. It was shippped from Arkansas in migrant cars [railroad] along with the horses, cattle, furniture, people, pets, etc. It was unloaded at the big platform right in front of John Beall's store in Mathis.

The school was on the J.M. Bomer place and was later moved to the McEachern place. E.T. Bomer sold land to the community for the new school building which was the one still standing in 1972. Some of the teachers were Herbert Gist, Pauline Henley, Mrs. Ples Pruitt, Mrs. Walter Murphy, Dorcas Mae Haynes, Arnette Cox, Evelyn Morre, Ethel Knowles, Mae Eason, who married Frank Brown, Essie Wilkes and a Mr. Brice who was related to the Brices who later operated a funeral home in Three Rivers.

From The History of the People of Live Oak County, Texas. p. 9.