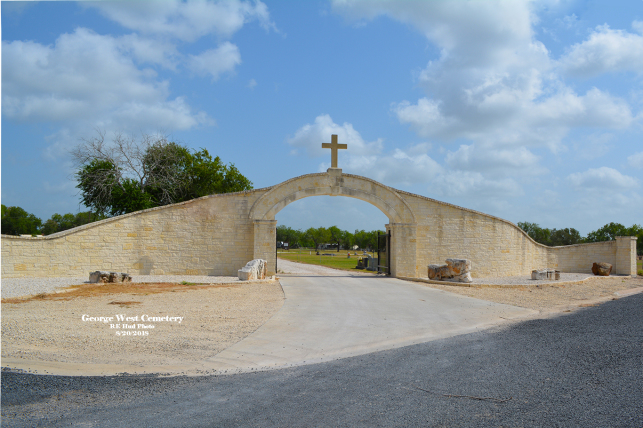 Entrance to George West Historic Texas Cemetery. In 1916, George West, South Texas rancher and philanthropist, made a plait for his namesake town. About the same time he donated property outside of town for a cemetery. A few people were already buried there. Except for one, their stones were unmarked or unreadable. The earliest readable marker,  written in Spanish, was for Espetacion Garza, a young man of only 15 years. Most likely an employee of George West's ranch, his date of death was just months before West donated the property to citizens of Live Oak County as free burial property. Photo courtesy Richard Hudson.

Thanks to the W.C. "Bill" and Beverly Meider family and many who have families buried in George West Historic Texas Cemetery. They donated time and money to grace the cemetery with an auspicious entrance. Johnny Guerra, Master Stonemason, crafted the entrance.

Marker Chair, Richard Hudson,​ wishes also to thank Glynis and Sherry for their excellent work in receiving the Historic Texas Cemetery Designation and Glynis again for helping the Hudsons in the marker application process. Thanks also to Mackey Alvarez for information on the Ramiro Garcia family.

Date Unveiled: To be announced

I. CONTEXT: George West Historic Texas Cemetery is located on Cemetery Road 1.02 miles northeast of the Live Oak County Court House in George West. Both the courthouse and the cemetery are north of US 59. The cemetery is a small portion of the Pedro Guano Original Survey Number 21, Abstract Number 193 in what is now Live Oak County.[1]

Irish Catholic immigrants began settling a vast essentially unpopulated part of Mexican Texas, now known as Live Oak County in the 1830’s. They set aside small burial plots on their farms or ranches for themselves and others nearby when the occasion called for it.[2] As communities grew, churches were built and burials near the churches became more common. Among those was St. Joseph’s Cemetery around St. Joseph’s Catholic Church near Gussettville.[3] Towns like Lagarto and Oakville created nonsectarian cemeteries.[4] Three Rivers, the other town to survive the coming of the railroad, began in 1913, and by 1915, had a cemetery of its own.[5]

The George West Historic Texas Cemetery was originally part of the George West Ranch. The Ranch dates to the 1880’s when George Washington West (1851-1926) and his wife, Kittie Searcy West (1858-1939) purchased 140,000 acres of land in Live Oak County. George was well-known as an original Texas trail driver.[6] Drought and famine cost West greatly, but he persevered establishing a wealthy base with his brothers to continue running the ranch while he and Kittie moved to San Antonio in 1902. George and Kittie never had any children. Together, they doted on their nephews and nieces while George concentrated on his own projects.[7]

By 1914, George set out to build a town on his ranch around the depot site next to the tracks of the San Antonio, Uvalde, and Gulf Railroad. He enticed the railroad to build through his ranch with $100,000 and free right of way. “He built a $75,000 Court House, a $50,000 school, highways, bridges, waterworks, a light plant and hotel …”[8] He advertised his new town far and wide.

Among the many gifts George West bestowed upon his namesake town was a cemetery.  On March 4, 1916, George set six acres of his vast ranch apart as a cemetery to serve the community of George West and Live Oak County.[9] Since then, it has continuously served the George West community with a population of 2,445 and the county with 11,533 on the 2010 census.[10] The management of the cemetery property remained with George West and his family until his death on February 16, 1926.[11]

On August 12, 1926, the independent executors of the Estate of George W. West confirmed his original six acre cemetery gift to the citizens of Live Oak County. West’s executors were: Albert W. West (a nephew), Charles Schreiner, Jr., Seth A. Searcy, Charles E. Burns, and the San Antonio Loan and Trust Company. The deed states the cemetery is for the benefit of the George West community and the people of Live Oak County. West and his executors specifically noted that “Live Oak County Commissioner’s Court would from time to time appoint persons to convey lots for purpose of burials free of charge.”[12]

William Hale Canfield (1907-1991) donated property which is now included in the George West Historic Texas Cemetery on two separate occasions. His first on August 31, 1945 gave 5.72 acres and a second gave 0.72 acres.[14] Later on December 12, 1996, Hale conveyed another 2.15 acres to the county.[15] These donations brought the cemetery property to more than twenty acres.

George West Historic Texas Cemetery sits on Old Cemetery Road on an access road from US Highway 59 to downtown George West. A decorative gate graces the entrance. Native oaks and shrubs abound, some volunteer. Bermuda and native grass dries during droughts. Caliche roads give access throughout. Family plots of ten grave spots were once delineated with concrete curbing. That is no longer a practice. Most stone memorials are of marble. Since two major catholic cemeteries exist in the county, most of those buried here are of protestant faith both Hispanic and otherwise European lineage. Simple rather than ornate stones speak to that heritage.[16]

A number of old stones exist in George West Historic Texas Cemetery with no readable record. It is apparent that this ground was used for funereal purposes preceding West’s cemetery deed.[17] The first readable and dated stone is for Espetasion Garza inscribed in Spanish. Garza was born on “Autobre” 18, 1900 and died on January 18, 1916.[18] The most recent burial was for Danny Ray James born on April 27, 1950 and passed away February 29, 2020. His funeral was conducted at George West First Baptist Church. He is buried with his mother in George West Historic Texas Cemetery. His father and a brother were buried earlier in Gaines County Cemetery.[20]

George West did not choose to be buried in the cemetery which  bears his name. The town and cemetery were philanthropic, not personal, in spite of their eponymous nature. He is buried in the Alamo Masonic Cemetery in San Antonio.[21] Later, Kittie was buried there with him as are a host of Wests.[22] No Wests are buried in George West Historic Texas Cemetery.[23]

William Hale Canfield, who donated 8.59 acres to the cemetery, is the son of Chauncey and Minnie Canfield. The Canfields were among the first families to move to George West. “Chan”, as Hale’s father was called, built the first store and was the first postmaster. He and his family partitioned the back of the store with canvas cloth and lived there while contracting the first home built by occupants of the town.[24] The Canfields were among the founders and charter members of the First United Methodist Church of George West. Chan served on the first school board and served in many other civic positions. Hale grew up helping his father in the store and became its owner.[25]

Mable Frances Lamm (1913-2004) became Hale Canfield’s wife in1936. Her family purchased the George West Utilities from George West. She helped her father and Uncle Guy McGee wire and bring electricity to many homes and businesses throughout George West. Others in the family kept books and young one’s delivered bills.[26]  Both the Lamm and McGee families made valuable contributions to the growth of George West.

Judge William “Bill” Scott Kendall (1913-1990) moved to Live Oak County with his parents, Otto and Kate Scott Kendall, in 1914. They partnered with Bill’s grandparents ranching near Anna Rose and Clegg.[30] Otto bought the Live Oak Title Company in George West in 1917. Bill grew up in George West with school and his father’s business. He served in the US Army during World War II. He and his wife, Margie, had twins, W.S., Jr. and Margie. Together, Bill and Margie continued the Live Oak County Title Company after his father’s death.[31]

Bill Kendall was elected Live Oak County Judge in 1970 and served from 1971 through 1989.[32]Judge Kendall was a member of the Christian Church, but Margie and the children belonged to George West First Baptist. When her church voted to sponsor a Mexican American mission, Margie began a Sunday School in the one room building and took piano lessons so she could play for them. She is still living at this writing.[33] Judge Kendall is buried in the George West Historic Texas Cemetery along with his grandparents, parents, and seven other family members.[34]

Ramiro Garcia (1912-2000) was born and raised in George West. Ramiro first married Guillerma Fuentes, and they had six children. He later married Lena Chapa, and they had three children. Ramiro was a faithful employee of the Lyne family and then worked at a service station in George West for twenty-six years under numerous owners. Afterwards he worked at the George West Western Auto. Ramiro served in WWII.  Having[JH1]  worked all of his life without a chance for education, in 1963, Ramiro decided to go into business for himself. He opened the T&T Café with $5,000 and made it one of the most successful restaurants in George West.[35]

Ramiro sent all nine of his children through George West Schools. He sent four to college.[36] Mackey Garcia Alvarez, a daughter by Lena, served 14 years on the George West School Board and is still serving.[37] Ramiro and Lena are buried in George West Historic Texas Cemetery with his parents, Bruno and Teresa Garcia, and a sister, Margarita Garcia Chapa. Four children from Ramiro’s first marriage are also buried in George West Historic Texas Cemetery.[38] Ramiro and Lena’s children are still living.[39]

Improvements have continually been made to the cemetery including a water well, electricity, caliche roads, and waterline pipes. Notably, the George West Historic Texas Cemetery Gateway was dedicated in 2013. Funds were raised from families of loved ones who have gravesites in the cemetery. The W.C. “Bill” and Beverly Meider Family were major donors and provided vision. At a cost of $90,000, no debt was incurred. Master stonemason, Johnny Guerra, crafted the gateway. In December of 2019, Local Live Oak County Wreaths Across America sponsored wreaths on the graves of veterans since World War I.[42]

Since March 14, 1916, when George Washington West donated six acres to Live Oak County for a namesake cemetery, the George West Historic Texas Cemetery records the history of people of the City of George West and Live Oak County. Graves of pioneers to present families who worked in civic positions, schools, churches, medical help, military veterans from WWI forward, businesses, ranches, farms, and industry tell the worth of individuals in this area’s past. The cemetery’s rural landscape is true to the land known in the past, the nearby town with many of the same buildings, and people with many of the same names. The land in Live Oak County changes slowly, and the record of family roots are in the George West Historic Texas Cemetery.

An official Texas Historical Marker for George West Historic Texas Cemetery would preserve and honor this past with historical interpretation that educates young people and all in and from Live Oak County to the value of their history and the sweet, living memories buried there.

[10] George West and Live Oak County populations as of 2010 US census. Downloaded from https://en.wikipedia.org/wiki/George_West,_Texas and https://www.census.gov/quickfacts/fact/table/liveoakcountytexas/PST045218 on March 29, 2020.

Various maps and plats of cemetery.