Gaps in the Chisholm Trail - A Tree with Unrecognized Roots

Speech delivered at the dedication of the Chisholm Trail Marker on the City Square, Three Rivers, Texas, Sunday, May 1, 2016 and later in George West, Texas

Thanks, Judge Jim Huff, Mayor Sam Garcia, LIve Oak County Historical Commission (LOCHC) Chairman Leslie Walker, and members of the LOCHC Committee, I applaud your efforts and that of Texas Department of Transportation (TXDoT) to mark this trail. My wife, Susie, after 32 years of visiting graveyards, archeological sites and old forts, reminds me that while growing old is mandatory, growing up is optional.

The Chisholm Trail: First, why are we doing this?  "Those who do not learn history are doomed to repeat it".  In this short talk, I will address why, what, when, where, who and how? This will NOT be about general information that is available in books, on web, etc. Its purpose is to give information that is NOT otherwise available but based on my 30 year familiarity with the subject of western history.

My own interest started in First Grade; Mrs. Kreuger taught us to sing songs about the Chisholm Trail.  Then about 1960 when I interviewed the oldest man in the county, Darius Mahoney, who was 95. In 1984 when I filmed a documentary of Loma Sin Caja with Lyn McClagherty, who then more than 90 years old had actually ridden the Chisholm Trail trip himself in a commemorative ride a few years prior to our documentary.

Today's purpose - Celebrate 150 year heritage of the sacrifice and hardship required of those brave souls who were our ancestors that contributed to the cultural advancement and economic benefits that we enjoy today.

Good for Three Rivers, Live Oak County, and tourism in southern Texas which is the most historically neglected portion of the state.  Why? Does the brush of the Brasada prevent historians view? Although many popular books neglect the history of south Texas, the subject

of cattle drives remains popular in  song and fiction - e.g.  Lonesome Dove. Many aspects are still debated:  the origins, the routes, the destinations, even the name; I am using Chisholm Trail definition by Gard (Note * below). Visualize the trail as a tree, with roots in southern Texas, a main trunk, and branches.

The Chisholm Trail - What is it and why was it laid out?  Short answer - because after Civil War, our state's only assets seemed to be cattle for which no market was available.  Trail drives prior to Civil War caused the closing of the trails in Missouri and Kansas due to Texas fever.

Definition – “Chisholm Trail” was technically, term used accurately only for the portion in Indian Territory. At first [the trail from Texas]was simply referred to as the Texas Trail, or the Shawnee Trail, or The Trail. The length was various, from 1200 to 2500 miles, depending on origin and destination. The first destination was Abilene, Kansas, stockyards established by Jos. McCoy who persuaded the railroad to lay siding at edge of quarantine area. In 1874 the Kansas Pacific Railway identified the settlements of Oakville, San Patricio, Beeville, Helena, Refugio, Corpus Christi, Kingsville, and Matamoros as origins.

Location - Where?  Origins of the trail were in southern Texas; cattle ranching in North America originated as early as 1718 with the Spanish missions established along the San Antonio River. Mission San Jose (1749) recorded herds of 2000 cattle and 1000 sheep, Rancho de las Cabras, the Wilson County ranch of Mission Espada had thousands and Mission Espiritu Santo at Goliad had 40,000 head by 1770. But specifically, where in southern Texas?

Clues are found in the book, Trail Drivers of Texas, wherein stockyard owner George Saunders invited old trail drivers to contribute memoirs. Where did these drovers say their herds originated? My analysis of memoirs from southern Texas counties yielded the following results:  Atascosa - 29 memoirs, Frio and Goliad both 27, Karnes 21, Live Oak 18,  Bee 15, LaSalle 14, Bexar 13, Refugio 12 and McMullen only 7. This last number possibly indicating the comparatively late settlement of that sparsely populated county. That is why in my 1981 article published in the West Texas Historical Association (WTHA) Yearbook (p.94), I extended Sandoz's map of all plains cattle trails (6) to these roots. A quilt with historic local cattle brands is hanging in the bank in Three Rivers at this writing (removed in 2017).

Destinations - First, Abilene, then as railroads extended tracks west, Ellsworth, Newton, Caldwell, Wichita and other towns. The Western Trail went via Ft. Griffin, Doan's Store on the Red River, ending at Dodge City. Herds from south Texas followed the Old Shawnee Trail by way of San Antonio, Austin and Waco where the trails split. The route that became Chisholm Trail continued to Ft. Worth, crossing the Red River at RailRoad Station, then on to Newton, Kansas, which is now U.S. Hwy. 81.

When - According to the New Handbook of Texas, the classic period of trail driving longhorns from Texas was from the end of Civil War until late 1880's. Period of use of Chisholm Trail was 1867-1884 when finally closed by barbed wire. According to the New Handbook of Texas (NHT),  the first herd to follow the trail later named after Chisholm was that of O. W. Wheeler who in 1867 bought 2400 steers in San Antonio planning to trail them to California. At Canadian River in Indian Territory, he saw wagon tracks and followed them north.  The tracks were made by Scot-Cherokee, Jesse Chisholm, who had hauled trade goods to Indian camps 220 miles south of his post near Wichita, Kansas.

Results – During the trails brief period of use, it was followed by more than five million cattle and a million mustangs representing the greatest migration of livestock in world history.

Who - Recently, research has shown that as much as one third were either Hispanic or black (Byron Price in Trail Drivers of Texas). The average man size using the Civil War average height was about 5' 6" to 5' 8"; boot size - 6-8; waist size - 24-28"; average weight of adult male about 143 lbs. (Bell Wiley, Google).

How - Through courage and determination!  The typical outfit included a chuck wagon, hooligan wagon, trail boss, 10-12 or about a dozen cowboys, a cook, and horse wrangler who could usually trail as many as 2500 cattle. Three months later arriving at destination at cost of about 75 cents per head. They averaged 10-15 miles per day as cattle grazed along. After the system perfected, large ranchers like Richard King, Mifflin Kenedy, and Shanghai Pierce took their own cattle, but the normal method for smaller ranchers was to use a trailing contractor, like John Lytle, George Slaughter, Snyder, Blocker and Pryor Brothers and even George West and brothers. In my 1996 biography of George West for the New Handbook of Texas,  I repeated the story that West may hold the record for the longest trail drive, about 2500 miles from Lavaca County to the Canadian border. New Handbook of Texas (1996:Vol. 6:888).

End of the trail - After Indians were subdued and buffalo decimated, small ranchers began fencing which blocked the route and the 1885 Kansas quarantine law.

Conclusions - We have seen that neither the roots nor the branches of the Trail called Chisholm are perfectly clear.  Scholars still debate the names of the trails as well as the origins and destinations. We must do our part to see that history is preserved and not lost. As we have heard, "When an old person dies, a library burns."  An example I owe to my father, H. D. House, was the 1960 interview with nonagenarian Darius Mahoney.

What can we do?  We can encourage the teaching of history in schools; support our historiographers, civic leaders and organizations who are doing their best to preserve our history. I am here today because of the great teachers I had and at last, we can mark the route of our courageous ancestors who blazed a trail now called Chisholm. They suffered hardship and privation in the greatest livestock migration in human history, providing us with the most popular hero ever developed, the American cowboy!

Today's ceremony echoes what Berta Hart Nance said in her poem "Cattle" about 1925:

"Other states were carved or born, Texas grew from hide and horn."

Thank you, and be sure to accompany us to the next ceremony in George West where we will see a real longhorn and chuck wagon from the trail driving era.  Questions- chuck wagon or can see me later or over in George West.

*"...Some have held that the name Chisholm Trail should not be applied to the Texas part of the route.  Their reason, is that Jesse Chisholm blazed only the part in Indian Territory and Kansas, from the North Canadian to the mouth of the Little Arkansas.  The Old Trail Drivers Association of Texas took this narrow view in a resolution adopted in 1931.  Both history and folklore, though, have applied the Chisholm name to the entire route, including feeder branches in Texas and terminal branches in Kansas.  That definition is used here... (p. iv) 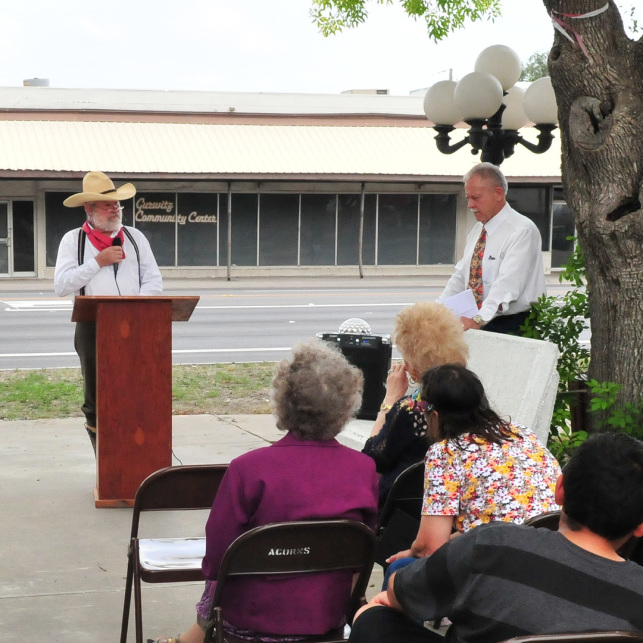 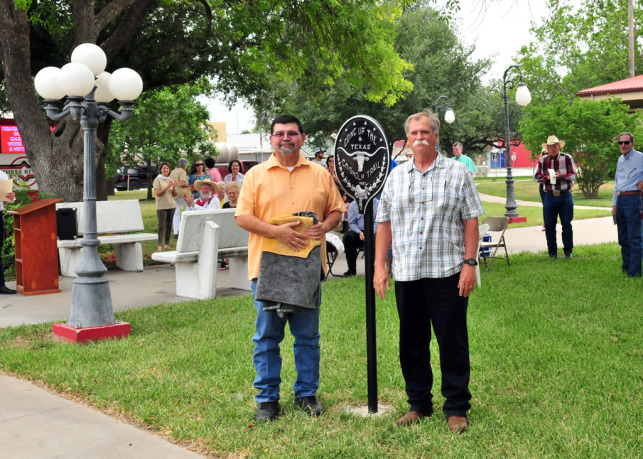 Geronimo is the world-famous Longhorn steer of rancher and town builder, George West. The original preserved Geronimo was placed in George West's namesake town (1929) by his nephew and the brick and glass showcase by the town's business men and women. Edna Ferber also memorialized Geronimo in her book, Giant, (1952) and the movie version which followed (1956) starring Rock Hudson, Elizabeth Taylor and James Dean. The steer's second replication was sent as an American ambassador to Moscow part of an American Bicentennial Cultural exchange in 1976. 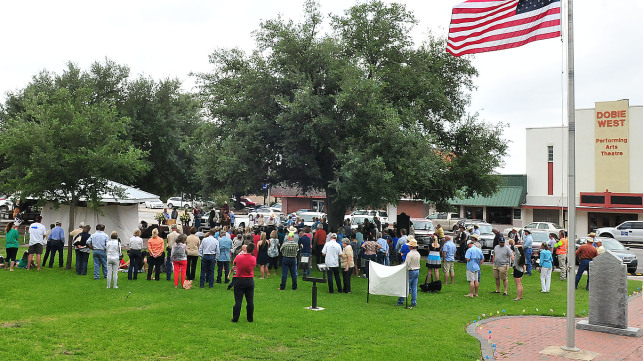 Crowd of about three hundred begins gathering to see the unveiling of The Chisholm Trail Marker and the newly refurbished Geronimo and his exhibition site. Photo courtesy Richard Hudson.