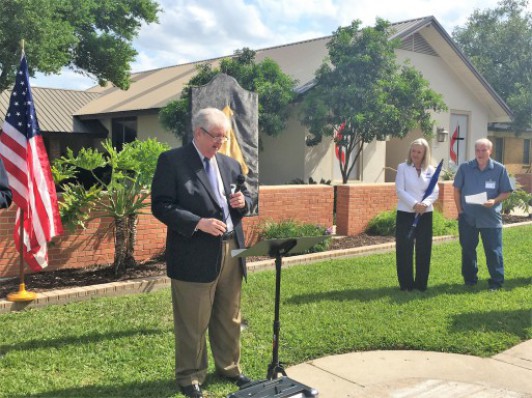 As Live Oak County Historical Commission Chair, one of Ross Harris' many responsibilities is serving as master of ceremonies during Texas Historical Marker unveilings. Ross, at the microphone. Leslie Walker and Allyn Weber to the right at the George West First United Methodist unveiling. George West FUMC was the first church in Live Oak County to receive a Texas Historical Marker. Both Gussettville's St. Joseph's Catholic Church and Simmon's Community Church have markers planted at their sites. These, however, are community markers addressing Gussettville and Simmons with mention of the churches in the text. This article written by Jeff Osborne, editor of the two county, Live Oak and McMullen County Progress, appeared March 6, 2019.

Ross Harris’ local ties run deep. In fact, ask the chairman of the Live Oak County Historical Commission how long he has been in the area and you might get a surprising answer. “I’ve been in George West for 150 years,” he said with a laugh.

Considering that the community in George West didn’t exist 150 years ago, the feat is even more amazing. Harris is actually in his 70s and was born in Three Rivers, but his family moved to the George West area when he was a child, and he attended all 12 years of school there.

After working as a certified public accountant in Sinton, Harris had the opportunity to join SouthTrust Bank in George West in 1979 and has been there ever since. He is currently chairman of the board for the bank after serving as president until 2015.

Harris said his love of history came later in life, and he became involved in the LOCHC when Leslie Walker, who was then chairwoman, recruited him to the board. “I had a newfound appreciation of history,” Harris said. “For a long time I wasn’t very interested in it, but now I find it fascinating. I love coming across new facts or enlightenment. It’s always fun, and if you learn something significant you get to share it with others.”

When Walker stepped down, Harris answered the call and became commission chairman. “I don’t know what (the commission) saw,” he said. “I might have been the only one who said, ‘OK, I’ll head it up.’”

The commission consists of members appointed by the Live Oak County Commissioners Court. “It’s very enjoyable,” Harris said. “We have 16 to 18 appointees who all seem to be of one mind, by and large, when it comes to preserving history. We’re just groping our way in the dark looking for projects. Mr. (Richard) Hudson is a great help as far as historical markers and the research needed. He’s very structured and I find his work fascinating when he finishes and shows it to me.” 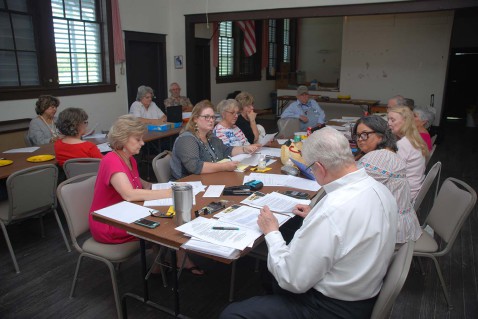 One recent project of the commission, Harris said, was getting a historical

marker for J.F. Gray at the Three Rivers City Hall Square. “He was a World War I hero and state representative for Live Oak County,” Harris said. “Before Choke Canyon lake was built, there was talk about putting a dam structure in Oakville, which would have put water over Three Rivers. Mr. Gray was instrumental in getting that set aside and having the lake placed where it is now.”

Another recent project of the commission was helping St. George Catholic Church get a historical marker for its 100th anniversary. “Being able to do that was very enjoyable,” Harris said. “That would have been the first church in George West, but when it was being built a storm came along and set them back two years. I am a Methodist, so I enjoyed working on the historical marker for the George West Methodist Church, which was the first church in the community.”

Harris recalls going to school in a two-story schoolhouse that was built with funds provided by town founder George West himself, he said, “but it’s no longer standing.”

in the city, as well as providing funds for several buildings in George West,

including the Live Oak County Courthouse. “The courthouse next year is celebrating its 100th anniversary,” he said. “The Texas Historical Commission has different categories and we hope the courthouse will qualify as a historical building. One of the criteria is the [exterior] building cannot be materially altered.”

Harris noted that the old jail which is attached to the courthouse was added later. However, that facility is no longer in use and is scheduled to be demolished this year, which would return the courthouse to its original layout.

Another project of the commission, Harris said, is having wreaths laid at

known gravesites of military veterans. “We were able to do that at the Oakville Cemetery in December and had quite a crowd at the event,” he said. “We are looking at the possibility of doing this at other cemeteries in Live Oak County.”

What has Harris enjoyed most about serving on the historical commission?

“Having a hands-on opportunity to take a lead role in making decisions to promote and preserve local history,” he said. “I find that very satisfying.”

One example he referred to was being able to recognize Thelma Lindholm for her efforts to preserve local history. “She wrote the information for historical markers during the middle of her life here,” Harris said. “It was wonderful to be able to honor her, and we were able to invite her nieces and they really appreciated that.”

A memorable experience was taking a field trip to the birthplace of famed Texas author J. Frank Dobie, who was born in Live Oak County. “That was very interesting,” Harris said. “It’s just ruins now. The caliche blocks that were used to build the home were not weather resistant.”

Another interesting historical structure was a well-fortified house built by the Ramirez brothers, early settlers in Live Oak County, to protect them from Indian raids.

Harris said there have been some difficulties in serving on the commission. “We are in effect a subsidiary of the county,” he said. “They dole the money out with a tight fist. I sometimes think if we had a little more money, we could do oh so much more. But the county commissioners have the same challenge as all public officials, and that’s to make sure there is a balanced budget.”

Harris said the commission’s costliest project was ensuring the preservation

of Geronimo, the famous longhorn steer that once belonged to George West

himself and is housed on the Live Oak County Courthouse square. “Leslie Walker led the efforts on that,” Harris said. “It involved putting a new hide on Geronimo and building a climate controlled structure to house it. We raised $100,000 to get that done.”

Harris continued, "Edna [Ferber], the author of the novel, Giant, went through the area and referenced a longhorn steer being located on the courthouse square in her book. “When I am working at the bank and see visitors looking at Geronimo, I sometimes go out and read them a passage from Giant that refers to the longhorn,” Harris said.

What changes would Harris like to see? “I wish we knew more of the history of the Hispanic families who settled here in the past,” he said. “We have not done a very good job identifying those Hispanic people who were pillars of the community long ago. For the first time, we are going to honor the Chapa family for their early contributions to Live Oak County, but we haven’t been able to connect them to any Chapas here now. They had a big 8,000- or 10,000-acre ranch in the area. We’re going to honor them this year, and I’m very pleased about that.”

Harris said he loves being able to help preserve local history. Based on all the interesting information in the area, he might just need another 150 years to safeguard Live Oak County’s heritage.

Jeff Osborne is the editor of The Progress. He can be reached at 361-786-3022 or theprogress@mysoutex.com.