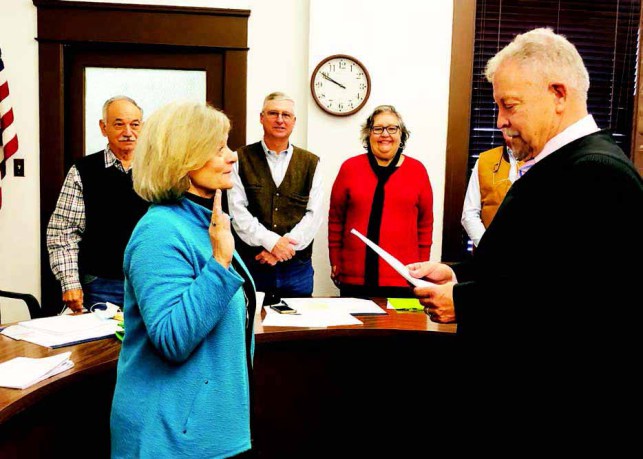 SHINING A SPOTLIGHT ON LOCAL HISTORY

Live Oak County entered 2021 with a steady eye on the past as well as the future, as the commissioners court appointed a new head of the Live Oak County Historical Commission. Mary Margaret Campbell, who previously served as vice chair of the commission, was appointed chair of the organization for the next two years. She succeeds Ross Harris, who served as chair for 2019 and 2020.

After serving as director of George West Storyfest for a decade and leading the Dobie Dichos program, which promotes the works and legacy of Texas author J. Frank Dobie, many in the area are well acquainted with Campbell. She has long worked to lead and support community events but said she had planned to take a step back this year.

However, Campbell was asked to take on a leadership role and she stepped up to the challenge. “As vice chairman, I did everything I could to maintain the commission’s efforts but I really didn’t feel like it was my position to take on new stuff,” she said.

“I’ve got some goals I want to see the commission accomplish. We’ve been really good at getting historical markers up and I want to continue that, but there are some other things we need to do, too.”

A few years ago, because of a membership roster that had become partly inactive, with some members on the roster who were deceased, Campbell recalled, there was a need to catch up on historical preservation in Live Oak County. “We had a lot of catching up to do as far as marking sites, and we’ve been very busy the last eight years with that,” she said.

“Our mission is twofold, to preserve and record history and to educate the public. We also collaborate with other organizations when it’s appropriate and possible, such as Wreaths Across America (which honors veterans via wreaths placed in cemeteries), the Day of Stories and Dobie Dichos. “We’ve got a scholarship grant in the works and Kurt House (a native of the Three Rivers area who now resides in San Antonio) has pledged a donation. “We also are putting together a brochure of historical sites in the county and I would like to see that come to fruition. I would also like to see more guests such as Monte Monroe (a historian and archivist of the Southwest Collection at Texas Tech University) come and make presentations here.”

A big push is underway to organize events to celebrate the centennial of the Live Oak County Courthouse, although COVID-19 complications have kept a firm date from being set. “As part of the centennial, we want to offer courthouse tours, bury a time capsule, possibly design a new county flag, and celebrate historical stories and music through the years,” Campbell said.

When growing up in the Lagarto area of south LIve Oak County, Campbell said she was a witness to people who experienced the county’s early days. “My family had a ranch in the southern part of the county and there were some gentlemen who would sit around the fire and tell stories,” she said. “I wish I had paid closer attention, but I was a teenager and was bored. “My dad knew all about the history of the area but he was focused on what was going on at the time. When I got older, I started realizing the importance of history.

My grandmother was born in 1907 and led a very interesting life. But it wasn’t until I was about 40 years old that I realized I better start asking her questions (about the past).”

Although she found history interesting in school, it wasn’t until she attended Texas Tech that a professor truly made the subject come alive for her, she said. “I had a professor who taught history from a sociological perspective and I found it fascinating,” she said. “He would draw from books about what was going on in the U.S. at the time and that would make the past come alive.”

Campbell graduated from George West High School in 1978, attended Texas Tech and worked as a teacher in Victoria until returning to the area to care for her father, a former cattle roper who had suffered a significant injury years earlier.

After returning to the area, she became involved in Storyfest and became a gas and oil landman. “It was not that far of a stretch going from teaching students how to do research papers to being a landman,” Campbell said. “I applied the research skills I had acquired and modified them to a new kind of information and terminology. “You talk about history — my favorite part of being a landman was reading the wills. It was amazing what you might see in those, and I worked during the oil boom.”

Asked if there were areas of county history that she felt needed more attention, Campbell said she’d like to see more focus on the southern end of the county where she grew up. “There’s a lot of history there and so much of it seems to have been overlooked,” she said. “I’d like to see more interest and research into the Lagarto area. There is some really interesting history to explore there, and there was a college there for a while.”

Campbell said she appreciated the leadership of former LOCHC Chairman Ross Harris and added that the commission is able to do what it does “because of the talents and time of the appointees and support of County Judge Jim Huff and county commissioners and Janie Armstrong, Huff’s administrative assistant. For those interested in exploring Live Oak County history, she said the upcoming brochure of historical sites should be helpful, and also encouraged people to visit the LOCHC website, www.liveoakchc.com.