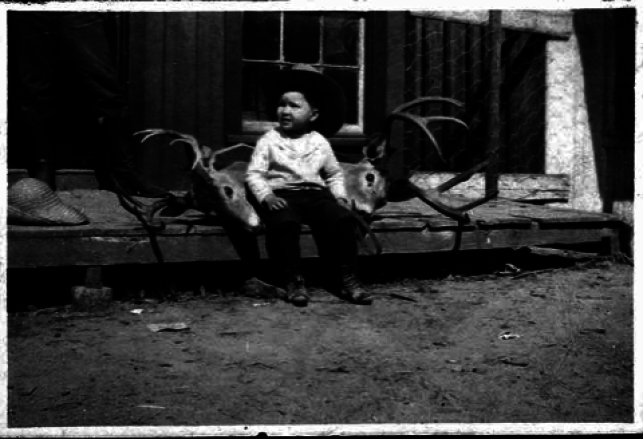 As told by Harry Leslie Hinton (above), taught school and became principal in George West High School. He served as a Marine in WWII Pacific Theatre. In the 1960's, he was Live Oak County judge for eight years.

(This story of Louis Bates was told to me by my mother. – HLH)

My father, Harry Hinton, operated a saloon in Oakville. Mr. George West lived on the West Ranch in the two story house. He bought his whiskey from time to time from my father.

Mr. West walked into the saloon one day to purchase some whiskey and said, “Harry, there is a colored boy who came up to my ranch the other night looking for work. I don’t have anything for him to do. Could you use him?”

My father had a small house a short distance from our residence, so he housed Louis there and had him work around the place. He remained with us until he was an old man. As a teenager, Louis had been kidnapped by cattle rustlers, but escaped in Live Oak County.

I was born in 1912 and my father died in 1914, so that left my mother with a 2 year old and an eight year old boy. Louis took it upon himself to help take care of me and my brother. Additionally, we had a small farm that he farmed and a few cows, hogs, and chickens that he tended. I can remember as a growing boy I would go to his little house and listen to him as he played the violin for me.

In later years, I asked Louis where he came from, and he said that he was born in Edna, Texas. I asked, “How in the world did you get to Live Oak County?”

He told this story: In those days cattle rustlers would drive through the country and pick up a few cattle as they went along. They would go into another area and get a few more. After they had stolen enough cattle they would “throw” them into a trail drive to Kansas.

I asked Louis how long he had been with them. He said, “Two years.”

He said that his duty was to take care of the “remuda” (Horses of the people who drove the cattle.) Louis said that he was afraid of being caught with them. One night they camped close to a ranch house he could see in the distance. During the night he slipped out of the camp and went to this house. Louis told the man that he needed a job, and he learned that his name was George West. He let Louis stay there that night. In a day or so he was told that he had another job and was taken to Oakville where he met his new employer, Harry Hinton.

Louis was about 17 years old when he arrived in Oakville. He died in about 1935 and is buried in the Oakville Cemetery.

I was two years old when my father died, so I did not remember him, but Louis Bates became a father figure to me. He spent his entire adult life on our place. For many years he was the only African American in Live Oak County.